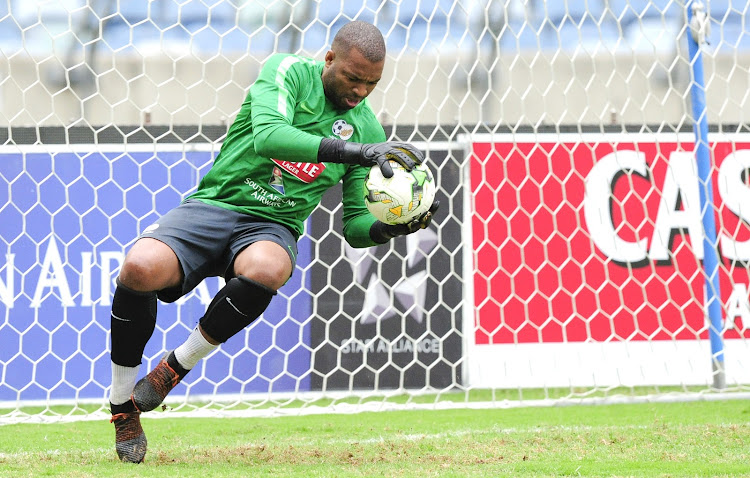 Itumeleng Khune says he will not become Bafana Bafana's fifth injury for their 2019 Africa Cup of Nations (Afcon) qualifier against Libya at Moses Mabhida Stadium on Saturday‚ and that a niggling knock he has been treated for will not stop him from playing.

Khune was treated for a wrist injury in Kaizer Chiefs' 2-2 first leg of their MTN8 semifinal against SuperSport United.

He missed Amakhosi's next game‚ a 2-0 Absa Premiership defeat against Bloemfontein Celtic‚ but was back for the MTN8 second leg against SuperSport‚ lost 1-0 by Chiefs.

"I'm fine – it was just a niggling injury that I suffered against SuperSport in the first leg. But the doctors are doing a great job in managing it‚" Bafana's crucial No.1 goalkeeper said.

"And I'm also a 24-hour pro. So whenever I get to my room I ask for ice. I keep icing it and take medication for it.

"So I'm feeling much better. But I can safely say that in a long time‚ this is the first time that I can come to camp and go into the match without any serious niggling injuries."

Khune believes the national team have enough quality despite the injuries.

"It was a great loss. But they have been replaced with other quality players‚" he said.

"As senior players we will help the new ones like Vincent Pule to settle in.

"And already this week he shown his quality. He created a goal and scored a goal in a friendly against AmaZulu."

Khune said the 2-0 training match win against AmaZulu‚ who were asked to sit back and defend‚ as Libya are expected to‚ was useful.

"The coach [Stuart Baxter] was able to get what he wanted. Because even before we came for training we watched the highlights of our opponents‚ and we know exactly where to exploit them. And we know their danger men.

"They are a good team. And to be honest we cannot go into this game and underestimate them.

"It's important to follow the coach's instructions and do everything we have been doing in training to win on Saturday."

Kamohelo Mokotjo almost permanently seems to be on the verge of a Bafana Bafana breakthrough.
Sport
3 years ago

The furore over Stuart Baxter appointing his son to Bafana Bafana this week could have been avoided had the coach finalised his technical team the ...
Sport
3 years ago
Next Article