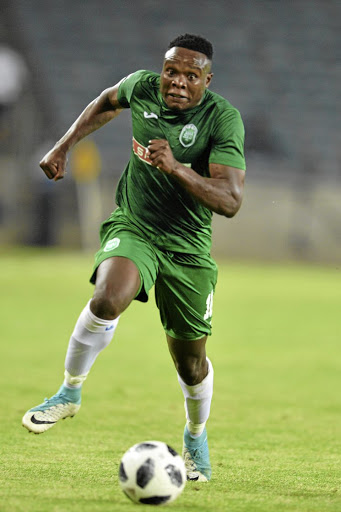 Rhulani Manzini is back at Chippa after parting ways with AmaZulu.
Image: Lefty Shivambu/Gallo Images

Having returned to Chippa United from AmaZulu, striker Rhulani Manzini has dismissed talk that he left Usuthu because of a strained relationship with coach Cavin Johnson, emphasising that he departed because he wants to earn his salary "fair and square by playing".

Manzini had joined AmaZulu at the start of last season from Chippa. During his short stint at Usuthu, he scored five goals in 21 outings across all competition.

Midway through last season it emerged that Manzini had a training ground bust-up with Johnson and was always going to leave the club. However, the 30-year-old striker has dismissed this speculation, suggesting he only left Usuthu because he was not getting enough game time while he was getting paid.

Manzini said: "I never fought with anyone at AmaZulu. I returned to Chippa because I want to earn my salary fair and square by playing. I feel so bad when I get paid while I am warming the bench like it happened at AmaZulu.

"I will always be grateful for the chance AmaZulu gave me, but I could not stay because I wanted to play regularly. At my age [30], I cannot afford to be on the bench because I am not getting any younger."

While he's yet to feature for Chippa, Manzini has a strong feeling he'll have a fruitful season under Eric Tinkler, who has just overseen one match after replacing Dan Malesela late last month. Chippa are winless in five league matches with four defeats and a draw.

Manzini feels they need just one win to turn the corner, setting his sight on helping the Chilli Boys secure a top-eight spot at the end of the campaign.