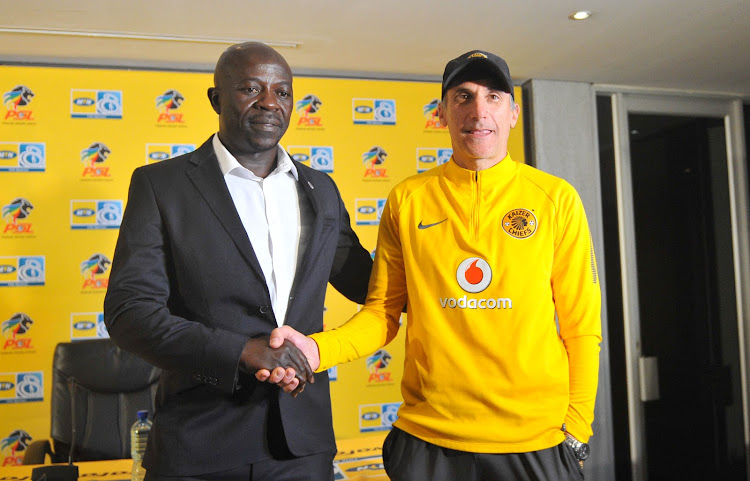 SuperSport United coach Kaitano Tembo has revealed that his Kaizer Chiefs counterpart Giovanni Solinas' tactics played into hands and “suited” his team when the two sides met in the MTN8 semifinal second leg at the FNB Stadium on Saturday.

United won the match 3-2 on aggregate to qualify for their sixth final in three years.

The match had ended 2-2 in the first leg and United won the second leg 1-0‚ with striker Bradley Grobler adding a winner to the brace he scored in the first meeting.

Tembo‚ whose team will now meet Cape Town City for a second successive year in the competition they won for a second time last year‚ said he was taken by surprise when Solinas’ team started the game off the front foot and looked flat on Saturday.

“I thought they (Chiefs) would be the ones coming off the blocks first but surprisingly they were a little hesitant‚” said a beaming Tembo.

“Probably it was all mental‚ they had a two-goal advantage. I think their approach was to prevent us from scoring.

“I had thought they would come out and try to get any early goal and that’s why our approach was to try and drag it 0-0 for longer and luckily enough that did happen.

Also pleasing for Tembo was to see a Chiefs line-up that also looked more defensive.

“When I saw the Chiefs line up I knew that they wanted to protect their two away goals advantage‚" he said.

“They now had two defensive midfielders in Willard (Katsande) and (Wiseman) Meyiwa‚ which meant (Siphelele) Ntshangase will push a little bit higher.

“It was a little easy to close them up because this line-up meant (Leonardo) Castro and (Khama) Biliat were playing far apart than they were in the first leg.

“They (Billiat and Castro) were a little bit spread and it was easy for us to cover those distances.

"I thought their tactics suited us.”