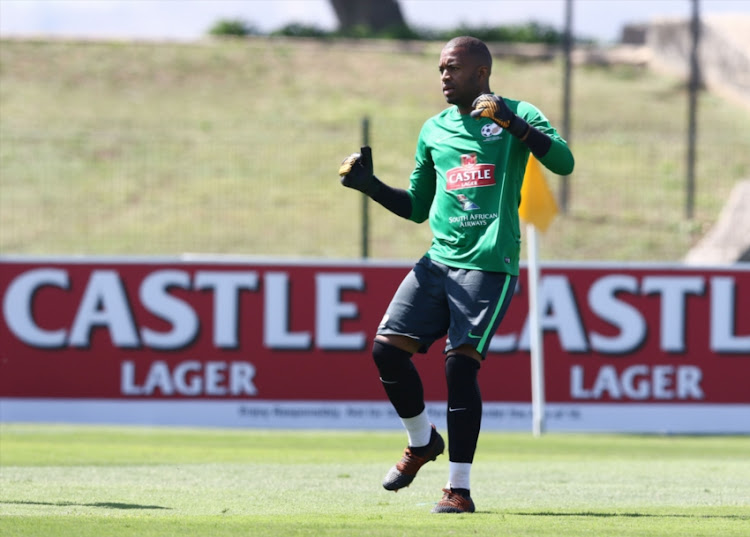 Itumeleng Khune will take a step closer to Siphiwe Tshabalala on the all-time list of Bafana Bafana caps if he features in the African Nations Cup qualifier against Libya in Durban on Saturday.

Tshabalala is currently in second place with 89 caps‚ his last a surprise selection off the bench when Bafana Bafana were chasing the game in their 2-0 home loss to Senegal in the FIFA World Cup qualifiers last November.

That cap came almost four years after his previous one‚ when at one stage he looked almost certain to reach a century of appearances for his country before being discarded for a younger brigade by first coach Gordon Igesund and then Shakes Mashaba.

Khune still looks the most likely challenger to Aaron Mokoena’s all-time caps record of 107‚ with the ex-Bafana skipper the only player to reach three figures so far.

He will win cap number 88 on Saturday if he plays.

It has not been all plain sailing for Khune in a national team jersey of late‚ he has appeared only eight times for his country in the last two years as injuries and long gaps between national team games have taken their toll.

He has previously spoken about catching Mokoena‚ and says for him it is a goal to go down in history as the most capped Bafana Bafana player ever.

“I told myself I want to be the best capped player in the country and I’m chasing that [Mokoena’s] record‚” he told reporters when he notched up cap number 80.

“But I’m running my own race‚ I’m not comparing myself with anyone.”

He has competition for a starting spot from Darren Keet and Ronwen Williams‚ who have both been in good form this season.

Although Khune has been the undisputed number one on the country for the last decade‚ that gap to his rivals has perhaps closed a bit with an indifferent start to the new campaign for Kaizer Chiefs that has seen him miss matches for personal reasons and injury.

Lee Baxter‚ the goalkeeper coach who is the son of Bafana tactician Stuart‚ also works with Khune at Chiefs so will be well aware of his current form.

The gloveman’s distribution remains a key weapon for the side too as he has the ability to turn defence into attack in the blink of an eye.

The player with the next highest number of caps in the squad to face Libya is Dean Furman with 46‚ while only four players have won more than 20 caps and one of those is Hlompho Kekana‚ who is a major injury doubt.