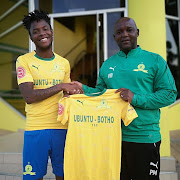 Mosimane said they worked very hard to lure the speedy 20-year old winger to Chloorkop‚ who spent an unsuccessful spell with Egyptian giants Al Ahly‚ on transfer deadline day for a reported R13m as an investment for the next five years.

“He brings speed that we used to have with Percy Tau and Khama Billiat.

"We have invested in him for the next five years‚” said Mosimane.

Sundowns lost to Cape Town City 4-2 on penalty shootouts in an MTN8 semifinal second leg at Lucas Moripe Stadium at the weekend and Mosimane said he could not wait to throw Mahlambi into the fray.

“You saw in the first half against City with Toni Silva and Ali Meza we stressed them with the breakout‚" he said.

"That is what we want from him but he must get fit first because you must remember that he did week one and two of pre-season with Al Ahly.

"The third week they went to Croatia and he was left behind‚ so he lost two weeks at home.

"On week four to five‚ they brought him back to the first team but he is not fully fit.”

Mahlambi is one of the new players at Sundowns together with the likes of Andile Jali‚ Musa Lebusa‚ Meza‚ Lyle Lakay‚ Toni Silva‚ Lebohang Maboe and Reyaard Pieterse.

Mosimane said their supporters must understand that he needs time to integrate the newcomers.

“I am not coaching this team for tomorrow only‚ but we are in this for the long haul‚" he said.

"We have a very good group that we can move forward with‚ but it is going to take time.

"You have to go through disappointments like losing in the semifinal of the MTN8 and in the group stages of the Champions League.

"But these defeats will help us to test the mental strength of the players.

"I am happy to play the new players like Lebusa in the heart of our defence in the pressure situation of a semifinal and test him because I know that in a few months from now we have the Champions League again.

“I know that our supporters are not that understanding but it is good to wobble a little bit and rise again at a later stage.

"We have spoiled them (supporters) because we are used to winning trophies‚ but let me incorporate the new players to the team.”