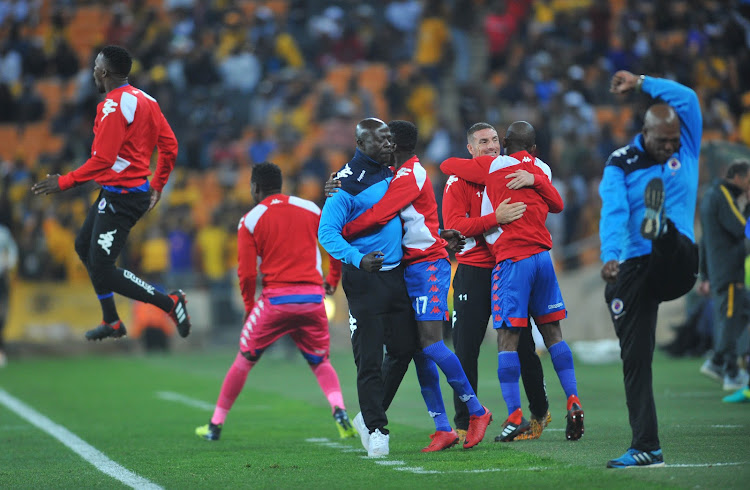 Kaitano Tembo coach of Supersport United celebrates with his bench during the MTN8 Semi Final 2nd Leg match between Kaizer Chiefs and Superspot United on the 01 September 2018 at FNB Stadium.
Image: Sydney Mahlangu/BackpagePix

A wry smile and a soft laugh were part of a few things SuperSport United coach Kaitano Tembo offered when he was asked how would feel if he was to face his former mentor Pitso Mosimane, the Mamelodi Sundowns coach, in the final of the MTN8 after his side knocked out Kaizer Chiefs in the semi-final at FNB Stadium on Saturday.

"About who he would like to meet in the final on September 29, Tembo said he’s got no preference between Sundowns and Cape Town City, the team they defeated on 4-2 on penalties when they won this cup for a second time in Durban last year. “That one is out of our hands," said Tembo.

"What’s important to us is to wish everyone who is playing today the best of luck."

Tembo who joined United as a player in 1999 was given a two-year contract as the head coach of Matsatsantsa at the beginning of this season.

The former Zimbabwean international had spent 12 years learning the coaching ropes from many astute coaches at United, including Mosimane, the first man to recognise he could himself become the coach one day.

While coaching United and having Tembo as the captain of the club, Mosimane revealed that he used to instruct Tembo to watch other teams and give him reports about their strengths and weaknesses before they played them.

So Tembo’s guided response about a possible clash with his former coach is understandable as the two share lots of notes on the coaching field.

By reaching the cup final of a trophy they won under Eric Tinkler at the beginning of last season, Tembo has done more than it was expected of him as a novice coach.

Already Tembo has got one league win over Gavin Hunt, the other coach he had played for and worked with at United.

Tembo’s charges recently beat Hunt’s team Bidvest Wits 1-0 in one of three league victories that have seen United having a great start to the season.

On Saturday Tembo outplayed and outthought Chiefs coach Giovanni Solinas, allowing his side to wait long enough to pounce with a killer goal by Bradley Grobler in 58th minute to win the match 3-2 on aggregate.

Tembo showered the match-winner Grobler with praise for getting his hat-trick against Chiefs in the two-legged semi-final and said the Bafana Bafana striker provides a vital element to their attack.

“Bradley is a typical number 9 for us. We missed him a lot towards the end of last season when he was injured,” said Tembo.

“Bradley is one player who can hold the ball for us and find spaces and bring other players into play and is a great finisher.

“Bradley helps in our attacking structure because he’s got the technique and moves into the right areas and spins at the right time.”