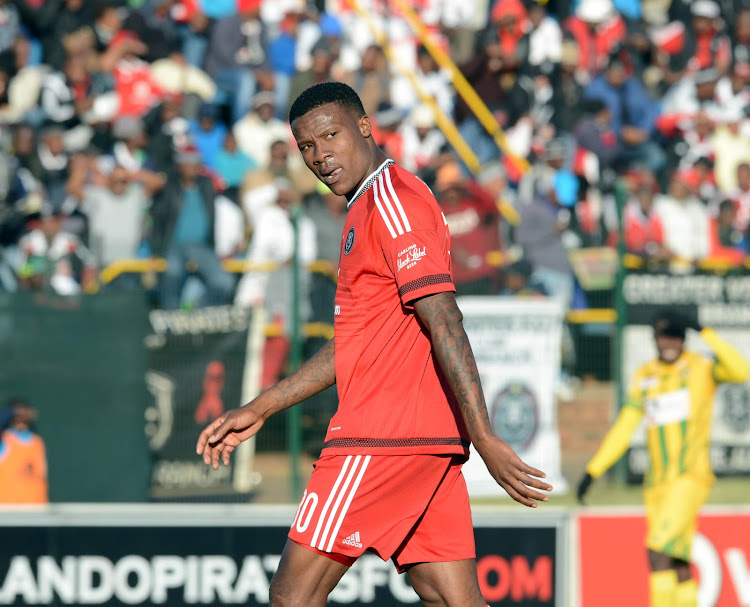 Orlando Pirates will take no further action against striker Thamsanqa Gabuza for storming off the field in their 2-1 Absa Premiership victory against Black Leopards in Polokwane on Tuesday night.

Pirates’ administrative officer Floyd Mbele said the club had decided that the Premier Soccer League’s automatic two-match suspension for the red card Gabuza received as a result of his actions would suffice.

“No there’s nothing further to happen. I think the league has sanctioned him and that will suffice‚” Mbele said on Friday.

“The chairman [Irvin Khoza] made a comment on radio saying that we obviously have to be circumspect about what happened.

“And we are going to take it as is.

“He’s offered an apology. So I think when somebody apologises why would you still want to drag him further down?”

Gabuza‚ who has had fans on his back for a missing some glaring chances this season‚ and was suffering abuse again on Wednesday night‚ had a rush of blood at Peter Mokaba Stadium.

After setting up Pirates’ opener with a cross in the 34th minute he stormed towards Bucs’ supporters behind the team’s dugout and threw his shirt at them.

He was angrily pushed back by Pirates coach Milutin Sredojevic.

Gabuza walked into the tunnel‚ then did not return until the 51st minute‚ when he was double-booked and sent off by referee Thando Ndzandzeka.

Mbele said Pirates feel Gabuza has been through enough and needs support.

“I mean everybody is split in-between – some for [further action]‚ others against it. We have to do what is right for him‚” the Bucs official said.

“When your child does not do well at school you don’t vilify‚ chastise‚ or chase him out of home.

“You sit down and evaluate what went wrong‚ and you put corrective measures – and it’s still your child.”

Mbele said such “corrective measure” would not necessarily fall to Sredojevic and Pirates’ technical team.

“I’m not sure what capacity the technical team would have in terms of corrective measures. Obviously we would have to look at what other remedial programmes we could be able to put to him‚” he said.

“But I think that’s a mid-term thing – it’s not anything we are going to think about now.

“We obviously need to let him settle down a bit – he’s been through a rough time.”

Pirates have no fixture – due to being out of the MTN8 semifinals‚ and also because of next weekend’s Fifa international date – until September 15‚ when they host SuperSport United at Orlando Stadium in a league fixture.

Orlando Pirates striker Thamsanqa Gabuza has apologised to the club’s supporters for making rude hand gestures towards the crowd while celebrating a ...
Sport
2 years ago

Thamsanqa Gabuza's rude celebration gesture towards the Orlando Pirates fans at the Peter Mokaba Stadium in Polokwane on Tuesday has been met with ...
Sport
2 years ago
Next Article