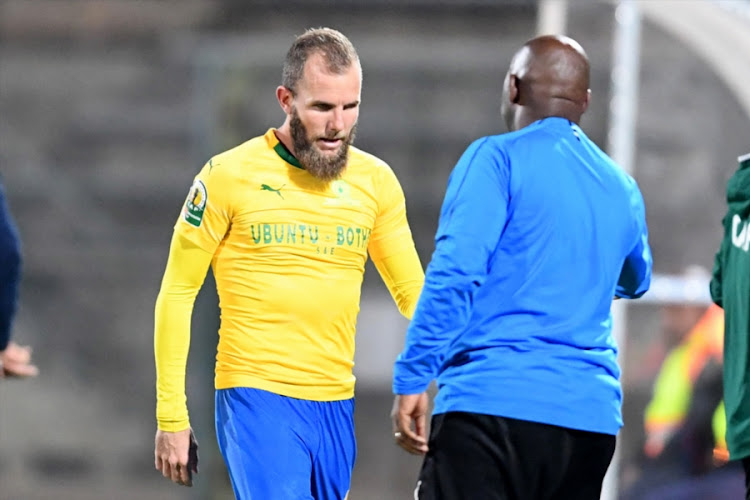 Pitso Mosimane has pleaded with the fans and the media to go easy on striker Jeremy Brockie and warned that putting too much pressure on the New Zealander could lead to what happened to Thamsanqa Gabuza in Polokwane on Tuesday.

Striker Gabuza was heckled by his own Orlando Pirates supporters after missing good scoring chances during a 2-1 Absa Premiership win over Black Leopards at Peter Mokaba Stadium.

The Pirates striker reacted‚ rather bizarrely‚ when he celebrated by running towards the supporters and throwing his jersey at them in frustration after his cross led to the opening goal for the Bucaneers in the 34th minute.

He then stormed off the field only to return in the 51st and be red-carded for his behaviour. Gabuza has since apologised.

“If you personalise it [Brockie’s lack of goals] on him you will create more pressure and stress for him. Yes of course his job is to score goals – that’s why we brought him here. To score goals let’s be honest‚” Mosimane said.

“Don’t put too much stress on him because if you put pressure‚ you know what happens a striker gets pressure from not scoring‚ I think you saw what happened in Polokwane‚” Mosimane said in reference to Gabuza’s tirade.

“The pressure‚ the supporters‚ you guys in the media‚ expectations – so let’s not create the same scenario with Jeremy and put him under so much pressure‚” pleaded the Sundowns coach.

Brockie is yet to score in an official match for Sundowns since joining from Pretoria rivals SuperSport United in a high-profile transfer in January.

It has been nine months since the Kiwi striker last scored and it seems only a matter of time before the Sundowns supporters start turning against him.

To make matters worse for Brockie‚ Sundowns have not won a match‚ or even scored‚ in their last four matches in all competitions.

“But it’s not only him [Brockie]‚ hey‚” quipped Mosimane in Brockie’s defence.

“Lebo [Maboe] scored long time ago in Polokwane. So all those guys have to come to the party.

“I think one of them is due to score. And I think Sundowns is due for a win hey. So let’s keep going somebody has to score. Anthony Laffor hasn’t scored for some time.”

Brockie will have a chance to break his drought when Sundowns host Cape Town City in the second leg of their MTN8 semifinal at Lucas Moripe Stadium on Sunday (kickoff 3pm).

Sundowns trail 1-0 from the first leg and Sunday presents the Kiwi with a chance to endear himself to the supporters by scoring a goal that could take the team into the final of the R8m cup competition.

It is extraordinary that Brockie has not scored in nine months if you view his record prior to last October.

Before joining Sundowns‚ the 30-year-old striker has been comfortably the most lethal forward in SA across all competitions.

He scored 55 goals in 117 appearances for SuperSport‚ an outstanding achievement that left him just two shy of the all time club record set by the late Abram Raselemane.

“So that’s what happens. Players are human beings. You can say whatever you want to say‚ when the stress and the pressure comes everything erupts‚” Mosimane added.

“And when it erupts it can’t be kept under control. Even for yourselves [the media]. Never mind the particular guy [Gabuza].

“So you’ve got to understand that they are human beings and they have families.

“I think his teammates can always help him not to be under that pressre but‚ anyway‚ at this level pressure is always there. If you don’t want pressure don’t be in the kitchen. There’s heat there‚” Mosimane said.

Orlando Pirates will take no further action against striker Thamsanqa Gabuza for storming off the field in their 2-1 Absa Premiership victory against ...
Sport
3 years ago

Thamsanqa Gabuza's rude celebration gesture towards the Orlando Pirates fans at the Peter Mokaba Stadium in Polokwane on Tuesday has been met with ...
Sport
3 years ago
Next Article