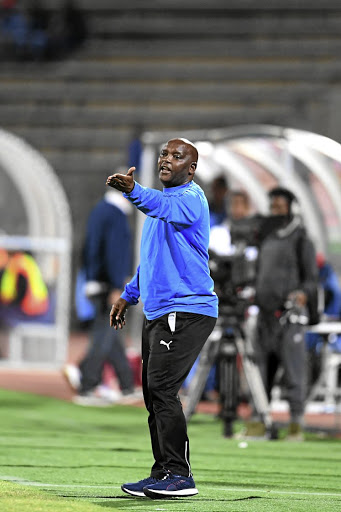 Mamelodi Sundowns were their own worst enemy in this year's CAF Champions League.

On Tuesday, the Brazilians failed to make it past the group stage following their goalless draw against Horoya from Guinea at Lucas Moripe Stadium in Tshwane.

On the night and playing in their own backyard, Sundowns missed some glaring opportunities. Pitso Mosimane's charges needed a win to progress as the runners-up from Group C, but it was Horoya who joined the group winners - Morocco's Wydad Casablanca - in the quarterfinals.

The last eight draw is scheduled for September 3 and Sundowns will not be in the hat. But Mosimane admitted that the damage was done before their last group encounter.

"Firstly, we should not have drawn with Horoya [2-2 in May]. We scored two goals and with five minutes left, we conceded a goal from a corner kick. So we were 2-1 up there [in Guinea] and there was no problem, but the biggest game for us was in Togo [against AS Togo-Port].

"There's no way we should have lost that match. It's unbelievable what happened in Togo [where Sundowns lost
1-0]. I've never seen a game like that in my career.

"How many chances? It was more than this one [against Horoya at home], because the chances against As Togo-Port were open - one-on-one with the goalkeeper," he stated.

It's not just the missed chances that the former Bafana Bafana mentor is concerned about. In a case where they drew 2-2 with Horoya, Mosimane wouldn't mind if his team played "ugly" to grind out a result.

"We play this tournament the way South African teams play - with a clean soul and fair play.

"Probably, we would have sat five players on the ground [to waste time] in Horoya," he continued.

"So probably, when we do the same thing then you guys must also bear with us to say we cannot suffer like this. I think you were here when AS Vita did the same thing. But for me, it really looks ugly and it's bad for football. You see the Champions League in Europe, you never see this."

Now out of Africa, Sundowns will face Cape Town City at the same venue in the second leg of their MTN8 semifinal clash on Sunday [3pm]. They trail City by 0-1.