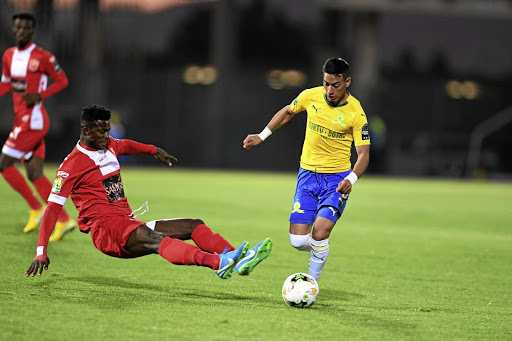 It turned out to be a disappointing night for Mamelodi Sundowns following their goalless draw against Guinean side Horoya last night.

Sundowns, however, have no-one but themselves to blame after missing opportunities that could have given them a win to progress to the CAF Champions League quarterfinals.

Instead, Horoya have joined Moroccan side Wydad Casablanca as the two teams that went through from Group C into the last eight.

In between their singing the home side's supporters let out some gasps as their favourite stars struggled to hit the target.

New Zealander Jeremy Brockie was having another off day and was even booked after just twelve minutes.

Brockie was then denied a goal after his attempt in the 18th minute was easily collected by Khadim N'diaye in between the goalposts for the visitors.

Before the break, Brockie was back in the picture with Tebogo Langerman laying on a pass for him, but his effort was blocked for a corner, which produced nothing for them.

Early in the second half Gaston Sirino crossed for Sibusiso Vilakazi, but the forward missed from close range.

Sundowns could have gone a goal down just before the hour mark had it not been for Denis Onyango, who pulled off a great save at full stretch to deny Brefo Mensah from a free kick.

Vilakazi then powered past his man and provided to Sirino, who shot straight at N'diaye with about fifteen minutes remaining.

With Horoya doing their time-wasting tricks, Sundowns were left frustrated, but even more disappointing was the end result which confirmed they are out of Africa's premium club competition.

And perhaps the writing was on the wall. After all, Sundowns have now gone four matches without scoring.

They will return to this field on Sunday to face Cape Town City in the MTN8 semifinals second leg.

Sundowns trail the Citizens 1-0 from the first leg.

Meanwhile, Wydad and AS Togo-Port also played to a goalless draw in their meaningless match which took place in Lome last night.

Wydad had already qualified after beating Sundowns in the last round, while Togo-Port had also been eliminated, rendering their match futile.

Wydad and Horoya will represent Group C in the last eight draw.