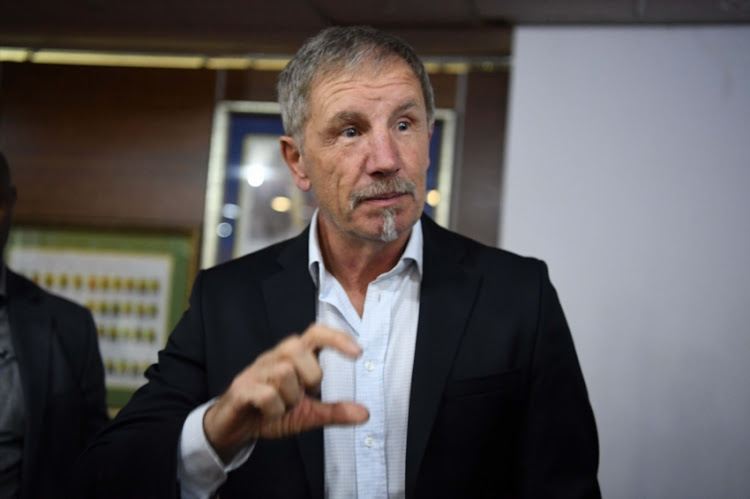 Stuart Baxter says the issue of the appointment of his permanent second Bafana Bafana assistant-coach has not been resolved due to budget and political constraints.

The Bafana coach said one issue was that the South African Football Association (Safa) cannot simply hire anyone due to budget limitations.

He said the political constraint was that Safa cannot just poach someone from a Premier Soccer League club.

Baxter did “trial” former Manchester United midfielder Quinton Fortune on a temporary basis last year but that move backfired over a public backlash to someone who as a player often turned his back on the national team.

For the most part‚ since his appointment a year and three months ago‚ Baxter has continued with just the one assistant‚ Thabo Senong.

When Senong was unavailable SA Under-17 coach Molefi Ntseki filled in.

Baxter was asked‚ as he announced his squad this week for the September 8 Africa Cup of Nations qualifier against Libya in Durban‚ about not having his preferred sounding boards as assistants.

“I wouldn’t say‚ ‘My preferred sounding boards’‚ because I've got a lot of time for the people who have been assisting me‚” the coach said.

“I think it’s been a difficult one because obviously budgets come into play. We can’t do what Cameroon just have and take in Patrick Kluivert and the Dutch lot [head coach Clarence Seedorf].

“You know‚ we have budget constraints and I understand that. It’s nothing where I accuse anybody of letting me down.

“We have budget constraints and we also have political constraints. When I say that I mean political within our game.

“We can't just go and steal from the clubs at the drop of a hat. We have to try and negotiate and at some point you work on it‚ and then it doesn't work.

“The people who we have got‚ Thabo has been working with his age-group [the Under-20s and U-23s]‚ and Molefi’s an excellent character and coach and I’ve got no problem working with him.

“I think as soon as possible we need to tie it down. But tying it down is part of a bigger picture as well‚ because Neil [Tovey‚ Safa’s technical director] has got other programmes he's working on as well.

“And we need to make sure that everything is dovetailed. We can’t just sequester this one and he may not want to be there.

“So it is a bit frustrating. and not because I don’t like the people I’m working with. It is just frustrating knowing that we have not nailed it down.

“But [the reason for] that is partly political and partly financial.”

Bafana meet Libya in their second Cameroon 2019 Afcon qualifier‚ having beaten Nigeria 2-0 in their opening game in Uyo in June 2017.