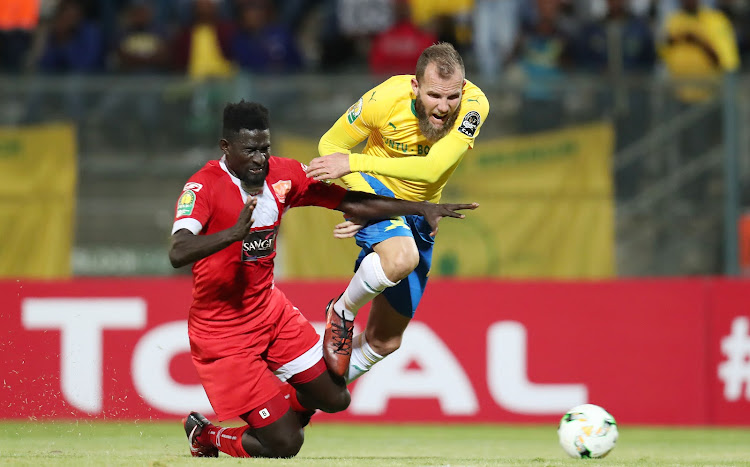 Jeremy Brockie of Mamelodi Sundowns fouled by Aboubacar Camara of Horoya during the 2018 CAF Champions League match between Mamelodi Sundowns and Horoya at the Lucas Moripe Stadium, Atteridgeville on 28 August 2018.
Image: ©Muzi Ntombela/BackpagePix

Mamelodi Sundowns’ Caf Champions League campaign came to an end after they were held to a 0-0 by Horoya AC of Guinea at the Lucas Moripe Stadium in Atteridgeville on Tuesday night.

The 2016 champions came into this match needing a win of any margin to progress to the knockout stages on head to head but coach Pitso Mosimane’s men wasted a plethora of chances against this modest Horoya side.

This was Sundowns’ fourth match in all competitions where they have failed to score and on this occasion it was Jeremy Brockie, Sibusiso Vilakazi and Gaston Sirino who were most wasteful after they dominated most of the possession.

While Sundowns played attacking football for most parts, Horoya, who knew that a draw was enough to take them to the quarter-final, sat back and tried to catch the Brazilians on the counter attack.

Sundowns will have to wait for next season to have another crack at this continental competition and their focus will turn to the MTN8 semi-final, second leg against Cape Town City here in Atteridgeville on Sunday.

Sundowns end the group stages sitting third below defending champions Wydad Casablanca and Horoya with AS Togo-Port at the bottom.

The first chance of the match fell for Brockie but his tame shot from outside the penalty box could not trouble visiting goalkeeper Khadim N’diaye after he received the ball from Sirino in the 19th minute.

A few minutes later, Sundowns attacked Horoya again but went just wide of the upright with one of his trademark long range shots.

In the 24th minute, Horoya almost shocked Sundowns with the opening goal through Godfred Asante who unleashed a long range shot that nearly caught goalkeeper Denis Onyango off guard.

Horoya had a few moments on the attack with Mandela Cansey and Abou Camara their main protagonists but they could not find the way past the Sundowns defense that was marshaled by Ricardo Nascimento.

On the stroke of half time, Sundowns launched a quick attack through Tebogo Langerman on the left flank from where he delivered a telling cross into the box but Brickie missed the ball and Sirino ballooned over the crossbar.

Sundowns missed another opportunity two minutes after the break when Vilakazi missed a sitter from another good cross from Sirino.

Sundowns goalkeeper produced a brilliant diving safe to deny Brefo Mensah from a free kick outside the box after Langerman was adjudged to have hacked Bolaji Sakin just before the hour mark.

Sundowns continued to push for the winning goal in the closing stages but Horoya stood firm to claim this famous victory where they will be mixing with the big boys of African football in the knockout stages.