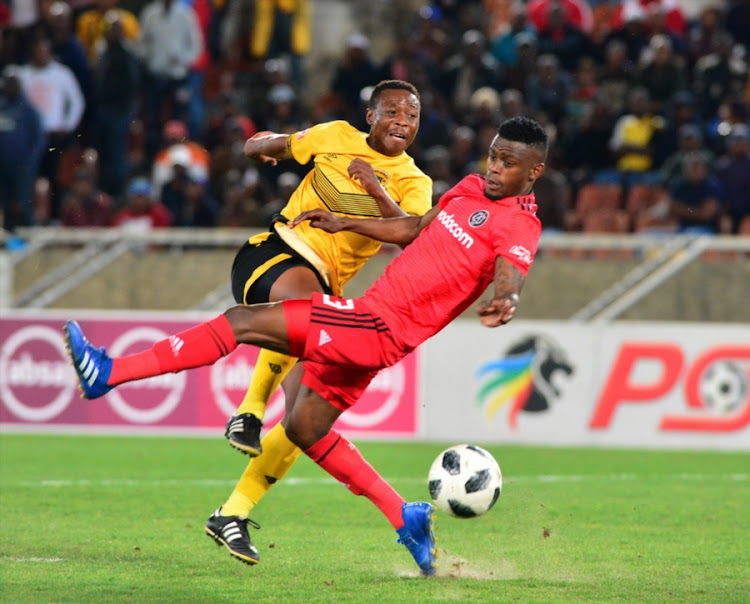 Orlando Pirates edged Black Leopards 2-1 in Tuesday night's action-packed Absa Premiersghip game at Peter Mokaba Stadium that had it all - the good, the bad and, in the case of Thamsanqa Gabuza's behaviour, the weird.

Bucs took a 2-0 lead through Thivhavhudzi Ndou's 34th-minute own goal and Vincent Pule's strike in the 66th. Joseph Mhlongo pulled one back in the 70th.

Bizarrely, Pirates played with 10 men from their opening goal in the 34th, though they were only officially reduced by a player in the 51st.

The culprit was big striker Gabuza, and the reviews of his actions that led to his double booking and red card from referee Thando Ndzandzeka will be much scrutinised in the post-match media analysis.

After missing a string of chances and having his own supporters on his back, Gabuza produced the cross that led to Ndou's own goal.

The big centre-forward then stormed off the field, and when he returned 17 playing minutes later seemingly feigning injury he was shown double yellow by Ndzandzeka.

Gabuza had a torrid first half.

The much-maligned striker whose bustling contribution is so often overshadowed by a lack of a final product in goals, seemed to come out with a point to prove.

He ran and jostled himself into scoring positions though, again, lacking a finish.

Bucs also were clinical in some incisive passing movements to pry Leopards open and set up their big striker for chance after chance.

Then his night got weird. From another fine movement by Pirates the striker was in space down the left, putting in a low cross that Ndou sliced past his own goalkeeper into his net.

Gabuza had a rush of blood, charging next to his own dugout, ripping his shirt off and throwing it in frustration at his own fans.

He was angrily pushed back by his coach, Milutin Sredojevic. But the striker just kept walking, into the tunnel and then the change rooms.

Bucs played the last 11 minutes of the half with 10 men.

In what seemed a ruse to try to prevent action against Gabuza, , six minutes after the restart the striker came limping out heavily strapped, even though he'd walked off unhindered.

Referee Ndzandzeka was having none of it. His first delayed yellow seemed to be for the shirt incident, and second for the storm-off and unsportsmanlike behaviour.

Bucs initially did not let the strangeness of it all disrupt their focus. They continued to plug away a man down and Xola Mlambo's chip found Pule steaming into a netball field of space and finishing.

The from Mwape Musonda's angled pass, substitute Mhlongo saw a first shot from the edge of the area blocked, then connected a fine dipping volley to the the looping rebound, pulling one back for Leopards.