We're ready for any opponent, says Da Gama after draw at Sundowns 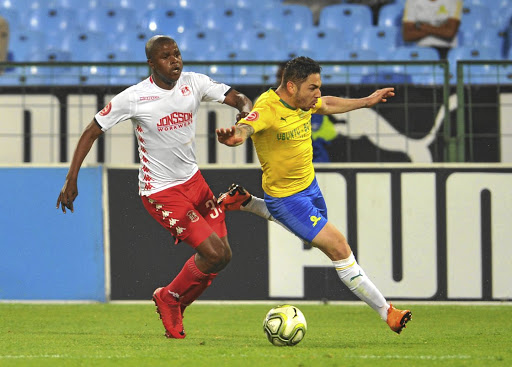 Ali Meza of Sundowns is tackled by Junior Sibande of Highlands during their league match on Wednesday.
Image: Sydney Mahlangu / BackpagePix

It's still early days in the Absa Premiership, but Highlands Park coach Owen da Gama is encouraged by what he's seen from his team.

Last season's NFD champions have had a decent start to their campaign in top-flight.

The Lions of the North drew 1-1 in their first outing against Orlando Pirates last month.

Highlands then blew a 2-0 lead to draw 2-2 with Black Leopards in their own backyard at Makhulong Stadium, but played better in their goalless draw against Sundowns at Loftus on Wednesday. "I thought from a tactical perspective, we were spot-on [against Sundowns]," Da Gama said.

"If you look at the statistics, the most influential player in Sundowns is Themba Zwane, and we closed him down. We closed Villa [Sibusiso Vilakazi] down and they were not really a threat.

"You have to understand it's not easy. We were playing the defending champions and the former CAF [Champions League] winners."

Highlands' next match is against Baroka away on Wednesday, and Da Gama reckons they are ready for any opponent. "We played [draws] away against teams that ended number one and two and I'm just proud of the boys.

"The only thing that can happen now is that the boys can only get better and better. There's still a long way to go before the end of the season, but we are just happy that these boys are getting better," added the former Bafana Bafana assistant coach.

Highlands are currently assessing striker Tendai Ndoro and defender Ayanda Gcaba, but Da Gama said it's too early to make a decision especially on Ndoro, who has just started training with them.