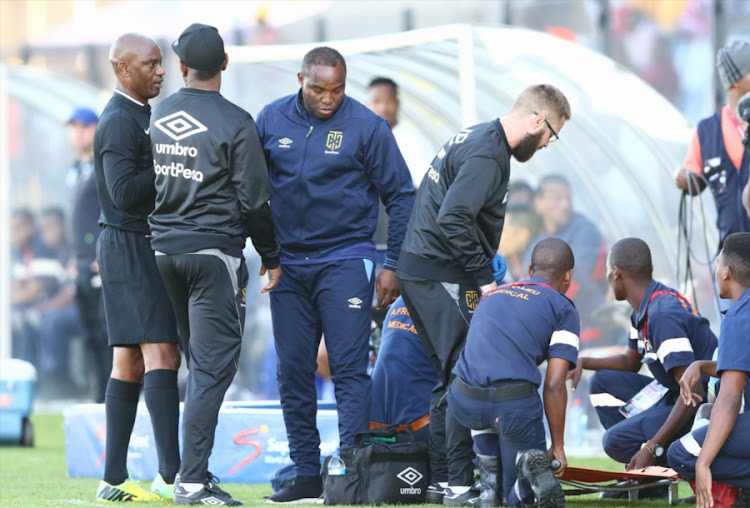 Cape Town City coach Benni McCarthy reacts after one of his players was roughly tackled during the MTN8 1-0 win over Maritzburg United at Harry Gwala Stadium on August 12, 2018 in Pietermaritzburg, South Africa.
Image: Anesh Debiky/Gallo Images

Losing both Khama Billiat and Percy Tau is a psychological blow to Mamelodi Sundowns‚ claimed Benni McCarthy on Thursday as he attempted to stir the pot before Saturday’s MTN8 semifinal‚ first leg tie between Cape Town City and the league champions.

But he did temper it with a prediction that new signing Toni Silva could turn out to be a marquee player for the Premier Soccer League.

“Psychologically it is a big loss for them [Sundowns] and it is added to be the fact that their new players haven’t really settled in and found their feet‚" McCarthy said.

“But it still doesn’t stop them from having the same quality that they had and the players that they have brought in have foreign experience‚ so they could be better equipped than what the likes of Percy and Billiat gave them.

“With time‚ once these new guys settle in and find their feet‚ I think they [Sundowns] are going to be as clinical … or probably even more so ... than what they were because they did make some exceptional buys.”

McCarthy made a particular reference to Guinea-Bissau international Toni Silva‚ who grew up in Portugal‚ came through the junior ranks at Benfica and was on the books of Chelsea and Liverpool.

“He’s a player who interested me a lot. He came on yesterday [Wednesday in Downs' 0-0 league draw against Highlands Park] and made a cameo appearance. What a player! World class! World class player!” enthused the City coach.

“I think once he is unleashed South Africa is going to have a new superstar playing in our league because he’s just a class above most players we have. He comes with pedigree‚ European experience and he’s been at youth level at Benfica and at Liverpool‚ and I don’t think you get a better education than at those two clubs.”

City host Sundowns at Cape Town Stadium on Saturday afternoon (kickoff 3pm) and then go to Atteridgeville for the return leg on Sunday‚ September 2.