Highlands Park grab a valuable point against Sundowns at Loftus 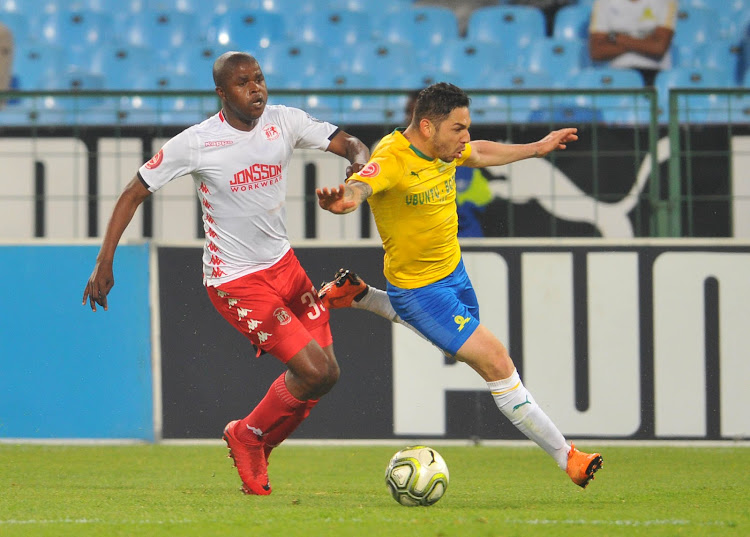 Highlands might not be a combination overly brimming with finesse. What they lack in style they make up for with a John Deere tractor-load of stubbornness.

Downs were reduced to 10 men with a red card to centreback Ricardo Nascimento in the 51st minute.

Highlands for the most part, led from the back by a towering defensive performance from Junior Sibande, kept to a disciplined, robust and effective spoiling gameplan and frustrated Downs to their second draw - the champions also have one win - of the 2018-19 PSL.

First Division champions Highlands have still to win back in the PSL, but they also still have to lose.

Three draws - in the previous one spurning a 2-0 lead against Black Leopards with two goals conceded in the last five minutes - will have given Owen Da Gama's men confidence that they are capable of competing at the higher level. Now they just need a few more points on the board.

Sundowns coach Pitso Mosimane's number of new, or six-month old just past new, attackers, such as Jeremy Brockie, Gaston Sirino, Jose Ali Meza and substitute Toni Silva, could not provide the breakthrough goal to break down a stalemate.

Sundowns predictably enjoyed the lion's share of the possession in the first half, though had to work for chances against the tough Lions of the North.

Inside the first minute Meza's knockdown found Brockie alone in the middle on the edge of the area, the Kiwi let down by his first touch.

Sirino's cross from the right was well aimed for Brockie at the far post, central defender Sello Motsepe making the crucial headed intercept.

Downs never managed to get their combinations flowing in the first half.

Highlands might even have gone to the break a goal up when Arendse made a hash of a clearance that fell for Sabelo Nyembe on the right of the area, who blasted a volley over.

Downs' frustration at the niggle from their opponents boiled over when Nascimento, just after the break, tugged at Park midfielder Sphiwe Mhlangu, although there seemed minimal contact.

Referee Phelelani Ndaba blew for a foul and seemed to be reaching for a yellow card as Nascimento lost his cool with an angry outburst at the official. Ndaba produced his red card instead.

Even with Sundowns a man down Highlands continued to stubbornly defend, seemingly intent on a point.

Downs stepped up their efforts for the three points. From Sirino's cross Arendse got up to a header that beat goalkeeper Tapuwa Kapini and was superbly cleared off the line by the head, the defender twisting acrobatically, of Highlands' defensive pillar Sibande.

Kaizer Chiefs might be in a cup semifinal at the weekend and inching closer to the trophy success that has eluded them for the last three seasons but ...
Sport
3 years ago
Next Article