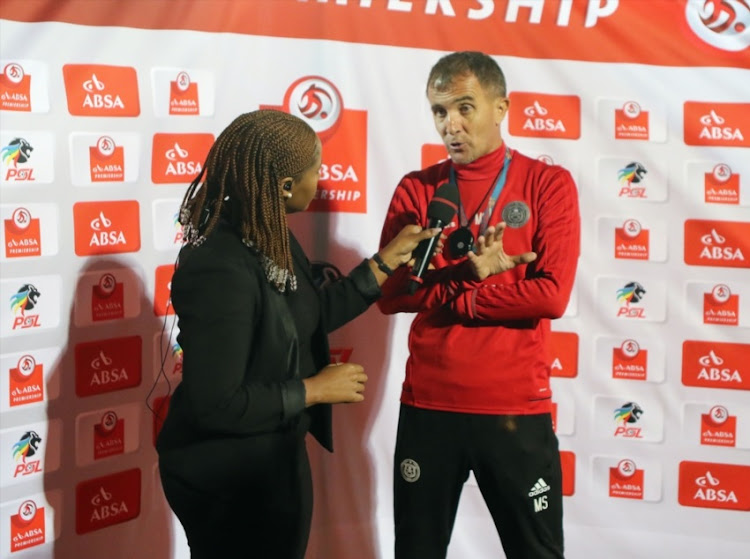 Orlando Pirates need greater speed in their buildups to create more scoring chances‚ coach Milutin Sredojevic has admitted after yet another disappointing result on the weekend.

A Pirates combination who have so much expected of them in 2018-19 have so far managed one win in five league and cup games following Sunday’s 1-0 Absa Premiership defeat against Bloemfontein Celtic at Free State Stadium.

That result was a third setback in succession‚ following last Saturday’s penalties quarterfinal expulsion from the MTN8‚ then Wednesday’s home league 1-0 loss against Bidvest Wits at Orlando Stadium.

Against Celtic Bucs again disappointingly could not utilise the obvious firepower in their lineup to create enough chances.

“We were not fast enough to bring the ball in the right areas. We have not done well from the point of the amount and numbers of chances.” Sredojevic admitted.

“Because what we did create you could see that the opponents were closing every single ball.

“It’s a very disappointing result. However the spirit of this team and the hard work that has been there is something that we need to take from this match.

“We need to improve very much in the speed of the buildup‚ and bringing the ball from non-pressure to pressure areas‚ to areas where we can endanger the goal.

“And of course we need to improve the attacking against a reinforced defence where the opponents are defending in numbers. We have a problem in breaking that defensive wall.

“We have still not set ourselves out in the right way to find our scoring boots. It is something that is a concern‚ and we are working very hard to sort out that problem.”

It seems hard for Sredojevic not to sound like something of a stuck record as still Pirates‚ after a good preseason‚ and with expectations raised after bolstering their playing and technical staff‚ continue to struggle to click.

“Where we are not [performing] is that we are lacking the amount of entrances [into the area]‚ whether it is side attack‚ beating offside‚ from set pieces‚” Sredojevic had said then.

The coach has an eight-day period between Sunday’s defeat and Bucs’ next fixture against Black Leopards at Peter Mokaba Stadium on Tuesday try to get his team firing.

He will hope he can‚ because Pirates need a new soundtrack this season.