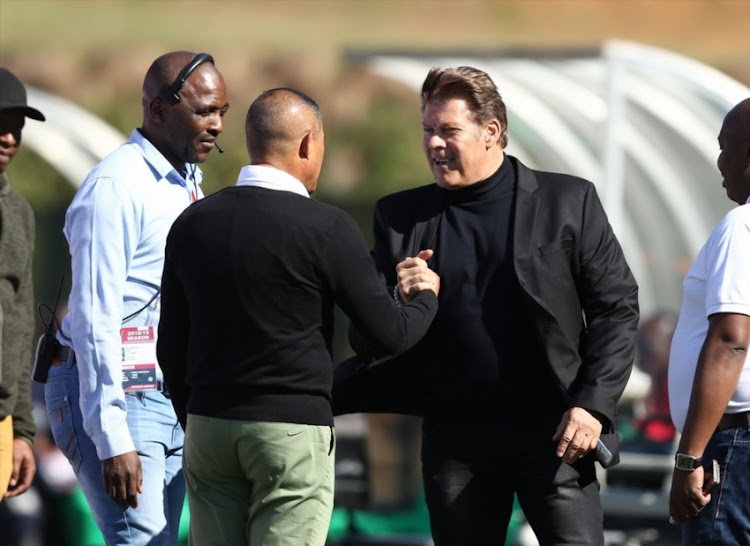 Controversial Free State Stars coach Luc Eymael is set to incur the wrath of the Premier Soccer League’s Disciplinary Committee after he failed to attend the post match press briefing for print journalists after his club’s 2-1 defeat to AmaZulu in Durban on Sunday afternoon.

The Belgian was said to have been so frustrated after his side's second successive defeat away from home in three Absa Premiership matches that he stormed out of the King Zwelithini Stadium immediately after honouring his interview obligations with the television stations.

Vilakazi added that he also did not know what prompted Eymael's decision to skip his post match duties.

“I don’t know whether he was not informed that he must come for the media interviews here‚” said Vilakazi when asked about Eymael’s whereabouts.

“I was also surprised when I was called to come in his place. I thought he was still around."

"It is an obligation to do them (post match interviews) however I do not have all the facts at the moment and we will investigate further‚" September said on Monday.

Vilakazi said Eymael may have been frustrated after Stars lost a game that at one point appeared to be in the bag.

"I think it’s frustration really if you lose a game like this one‚" Vilakazi said.

“We are not taking anything from AmaZulu because‚ to be honest‚ they regrouped in the second half and came to us.

“It’s a frustration because we were supposed to wrap up the game in the first half because we had four clear chances to just beat the goalkeeper.

“We even missed a chance where there was no goalkeeper at all guarding the goals.”

It is not the first time that Eymael finds himself embroiled in controversy and facing punishment from the PSL.

In March the PSL’s DC found him guilty after an altercation with AmaZulu goalkeeper Davies Phiri during a league clash that was played a month earlier.

He was slapped with a four-match ban but two of those games were suspended for 24 months on condition that he was not found guilty of a similar offence.

“People insult you all the time and when people say things to insult your family and mother and attack you‚ what do you do?‚" he said at the time.

“Next time if I get pushed by a coach or assistant or somebody insults me and my family‚ I have to fall on the ground and stay on the ground at my own risk.” In another match against Bidvest Wits in January he had a verbal exchanges with an assistant referee.

“I gave him my hand and told him compliments for the New Year. “And he was not looking in my eyes.

“If that’s an indication‚ then this is his problem‚” he said when he was asked what the fuss was all about.

Two second half goals by Argentine striker Emiliano Tade and Mhlengi Cele gave AmaZulu the three points after they had fallen behind early in the game following an own goal from skipper Mbongeni Zulu in the 5th minute of the first half.