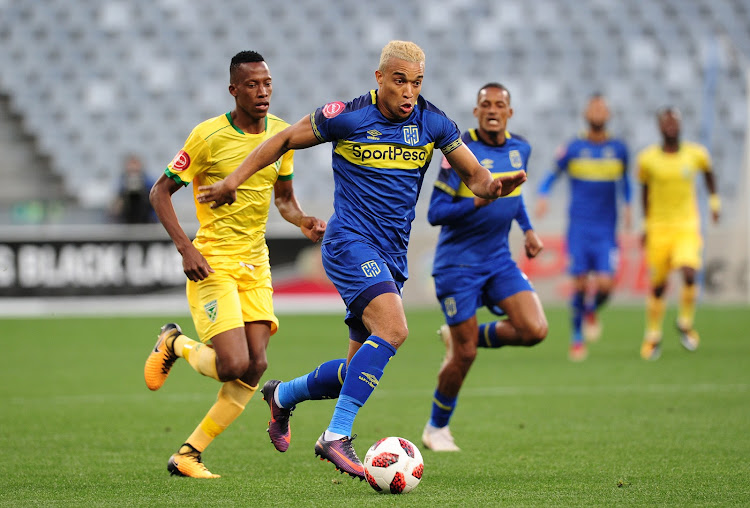 Coach Benni McCarthy cut a frustrated figure on the sidelines as he watched his Cape Town City side fail to capitalise on their dominance as they were held to a 0-0 home draw by a physical Lamontville Golden Arrows in the Absa Premiership on Saturday.

City’s problems were not unfamiliar, they had the greater possession and territory, but all their good work came to nothing in the final third as either the final pass, decision or shot was not good enough to break down a resolute Golden Arrows.

The visitors will see it as a good draw in a game in which they had their chances as well and were denied by the crossbar, with both sides now on four points from their three league matches this season.

City were without injured striker Siphelele Mthembu, while Matthew Rusike had also sat out training in the week but started.

Ayanda Patosi’s excellent set-piece delivery four times caused some alarm in the Golden Arrows box early in the game, and they should have been ahead on 19 minutes when another corner was flicked on to Ivorian defender Kouassi Kouadja at the back post, but he steered his effort wide.

Golden Arrows’ first real chance of the opening half fell to Knox Mutizwa, but he could not get his header on target.

A brilliant run into the box from City captain Thamsanqa Mkhize then put the ball on a tee for Patosi, but again the midfielder showed an uncharacteristic lack of composure to put his effort well over the bar.

Siboniso Conco came close to his first goal in a Golden Arrows shirt when his thunderous drive from the edge of the box was pushed onto the crossbar by City goalkeeper Peter Leeuwenburgh.

It was a fine shot and an equally good save. Leeuwenburgh was then almost made to pay for a poor piece of distribution as he passed straight to Conco, but the latter shot over the bar with options either side of him.

The second half produced less in the way of goal-mouth action as both sides failed to build on good build-ups in the final third, with Golden Arrows playing exclusively on the break.

City winger Surprise Ralani skipped past a couple of challenges to get to the byline, but his square-ball could not pick out a teammate.

The lively Ralani was forced off with what looked a knee injury shortly afterwards.

Home defender Taariq Fielies had an excellent chance to win it at the death, but as the ball fell to him in the box, he shot well wide, while at the other end Golden Arrows’ Danny Venter somehow missed from six yards.

Ria Ledwaba on a mission to fix women's soccer

It goes without saying that the development of women's football in the country is far off the pace.
Sport
3 years ago
Next Article