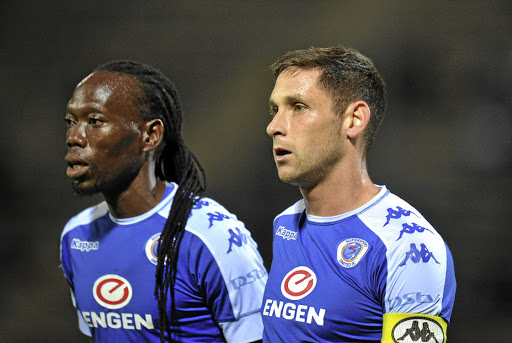 SuperSport United captain Dean Furman and his midfield partner Reneilwe Letsholonyane are optimistic that Matsatsantsa can challenge for the league title this term.

Since clinching three Absa Premiership titles in a row between 2007 and 2010, SuperSport have been more of the cup specialists than title contenders. The Tshwane-based outfit have won five domestic cups, amid their unprecedented decline, as far as challenging for the league title is concerned.

Barely two matches into the new premiership campaign, Furman already has a strong feeling that Matsatsantsa can go all the way and win the lucrative R10-million league prize. The skipper is eager to lead the club to their fourth league triumph.

"Over the last few years we've shown we are a competitive team by winning cups. One of our main goals this season is to win the league, and I believe that we can do it" Furman told Sowetan yesterday.

"I am determined to lead the club to their fourth league title. We want to get back to the top and challenge Mamelodi Sundowns, Orlando Pirates and all the teams who have ambitions to win the league."

SuperSport lost their opening league encounter 2-0 at Cape Town City but redeemed themselves by beating AmaZulu with a solitary goal in their second game. They face Bidvest Wits at Bidvest Stadium on Saturday (8.15pm).

Furman's midfield partner Letsholonyane has echoed the sentiment of his captain, believing the Kaitano Tembo-mentored side is capable of fighting for the league title this season.

"It is not about thinking that we can win the league but it is about the belief we have. I believe we have quality. We've a good mixture of experience and youngsters. This season will be our season for greatness. We are all hungry for the league title," noted Letsholonyane.