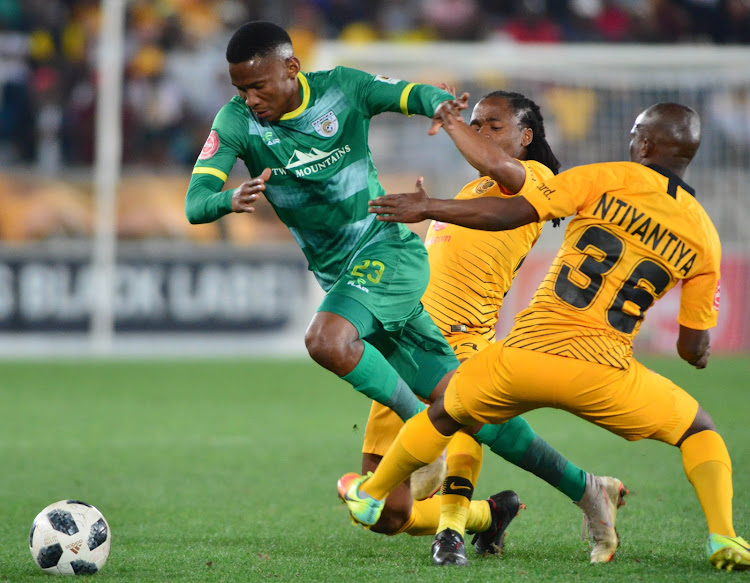 Baroka FC's Mpho Kgaswane gets away from a challenge from Siphosakhe Ntiyantiya and Siphiwe Tshabalala of Kaizer Chiefs during the Absa Premiership match at Peter Mokaba Stadium in Polokwane the on August 14 2018.
Image: Kabelo Leputu/BackpagePix

Kaizer Chiefs’ disappointing 1-1 draw at Baroka FC on Tuesday marks the worst start to a new Absa Premiership season in nine years for the Soweto giants‚ who are desperate to rediscover former glories this campaign.

It is also their second worst league start ever since the formation of the Premier Soccer League in the 1996/97 campaign and illustrates that there will be no quick fix for new coach Giovanni Solinas‚ despite the extravagant signing of Khama Billiat that was meant to solve the side’s goalscoring woes.

Tuesday’s point was preceded by draw with Mamelodi Sundowns by the same scoreline and a 3-1 home defeat to BidVest Wits‚ which leaves Chiefs with just two points from their opening three games of the league campaign.

The only time they have made a worst start after three games was the 2009/10 season‚ when the team finished third‚ as they managed just a single point after a draw with Santos (0-0) and defeats to SuperSport United and Bidvest Wits‚ both by 1-0 scorelines.

They managed to stop the rot that year with a 3-2 victory away at AmaZulu‚ while this season their next opportunity is also in KwaZulu-Natal against winless Maritzburg United on Friday.

That is followed by a home game against Steve Komphela’s Bloemfontein Celtic and a tough away trip to Cape Town City.

Solinas has blamed a hectic schedule that will see his side play five games in 15 days – including their 3-0 win over Free State Stars in the MTN8 quarterfinals last weekend – for the teams struggles in the league so far this season.

"These fixtures and this calendar are for robots‚ not human beings‚" he told reporters after the Baroka clash.

"It’s not possible to play every two days and travel. We travel four hours and play Friday‚ there is no time to recover and no time for training.

"It’s a big problem but this is a schedule we have to accept and we will try to give our best to win the game [against Maritzburg] and to play well."

KAIZER CHIEFS’ POINTS FROM THREE GAMES IN THE PSL ERA

More protection for players from crunching tackles is what the Premier Soccer League needs from its referees‚ says Cape Town City coach Benni ...
Sport
3 years ago

Bidvest Wits goalkeeper Darren Keet risked the wrath of the Kaizer Chiefs supporters when he took to Twitter to question the legitimacy of Simphiwe ...
Sport
3 years ago
Next Article