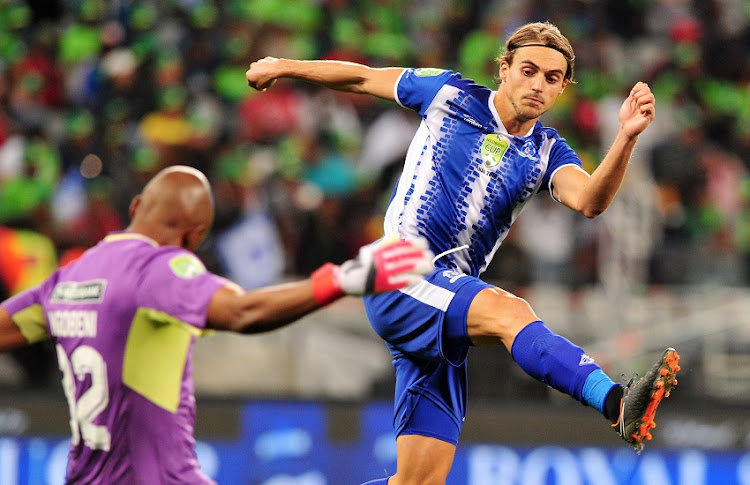 A calf injury suffered on the eve of Maritzburg United’s opening match of the new season has kept Belgian striker Andrea Fileccia sidelined and contributed to the club's poor return of just one goal in their first three games of the 2018-19 campaign.

Fileccia is set to return from injury in time to face Kaizer Chiefs on Friday night and coach Fadlu Davids is understandably a relieved man.

“He’ll definitely be available for Friday‚” said coach Fadlu Davids‚ looking forward to the strikers’ return‚ after three successive defeat for the side‚ for the home match against Chiefs.

“He was 90 percent ready for Sunday’s game against Cape Town City but it was very risky to use him for a game like that. We need him.”

But midfielder Fortune Makaringe‚ key to the side‚ sits out for a second game as he serves a suspension after a red card against Free State Stars last Wednesday.

“He gives us a lot in terms of being a first receiver and in terms of his organisation‚" Davids said.

"But Siphelele Ndlovu and Bandile Shandu did a fantastic job against City in that double-6 position‚ really showing their stuff in terms of the defensive duties.”

Maritzburg have found it tough to get going in this new campaign‚ in part because teams are not giving them much space to play and Davids has to rethink strategy for the visit of AmaKhosi at the start of the weekend.

“Teams are sitting back and giving us respect‚ we have to acknowledge that and realise it‚ after last season’s performances‚" he said.

"We have to find solutions.

"We can’t complain that opponents are putting a defensive structure in because all teams plan.

“We have to find solutions with the structure.

"I have to create an attacking structure that will suit the new players’ strengths.

“Last season we created a structure to suit certain players so that they could perform and display their skills and now that is what the process is about now‚ finds the right formula and the right solutions to be able to have that attacking fluidity‚” the Maritzburg coach added.