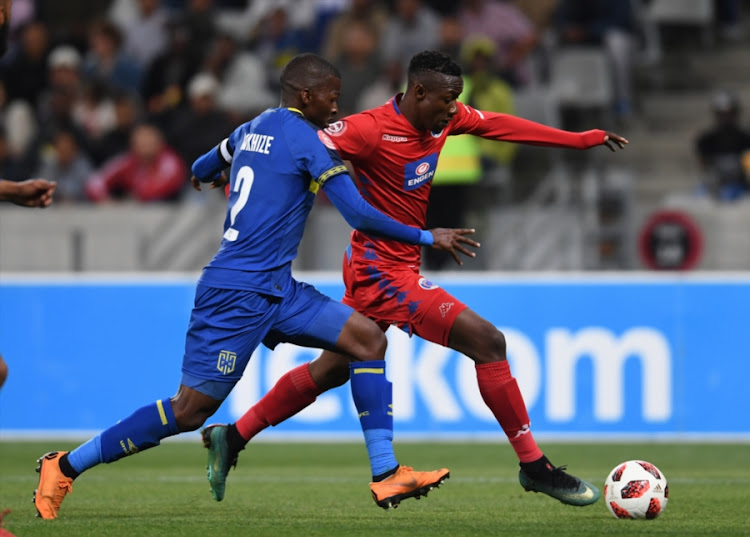 He left the pitch on a stretcher‚ his head tightly bandaged and his clothing stained with blood and was swiftly whisked to hospital.

Yet miraculously‚ Cape Town City captain Thamsanqa Mkhize might yet play on Saturday when his side host Lamontville Golden Arrows in the Absa Premiership at the Cape Town Stadium.

Mkhize has had seven stitches put into a deep cut just above his hair line on the left-hand side of his head.

But he suffered no concussion and with the right protective head gear should be fine to play on Saturday.

“I can play‚” he said emphatically to TimesLIVE‚ showing off the stitches‚ where a little of his hair had been shaved.

His clash with Bokang Tlhone was sickening bump of heads and Mkhize stayed down‚ with blood spurting from the cut and onto his shirt and the referee Victor Hlungwani frantically waving for medical attention to come onto the pitch.

Tlhone also need time to recover but was able to go on with the game.

But the 29-year-old Mkhize was stretchered off and taken to hospital as a precaution to check there were no fractures.

Clashes of heads‚ oftentimes horrific to see‚ are becoming more common place in the domestic game as the level of intense competition increases and there could be a time in the future where players might be forced to wear protective gear.

Mkhize’s recovery will come as good news to Benni McCarthy‚ who also hopes to have Teko Modise out from the treatment room and back for Saturday’s game.

As Kaizer Chiefs lurch through an erratic and unconvincing start to the season‚ new coach Giovanni Solinas has complained that the Premier Soccer ...
Sport
3 years ago

More protection for players from crunching tackles is what the Premier Soccer League needs from its referees‚ says Cape Town City coach Benni ...
Sport
3 years ago
Next Article