Khune back for Chiefs while Vries is hurt 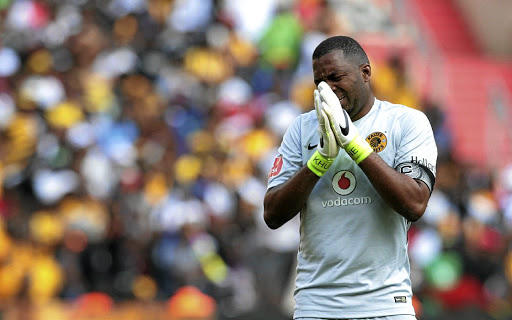 Kaizer Chiefs goalkeeper Itumeleng Khune is set to make his return to the starting line-up, with fellow stopper Virgil Vries sidelined with injury for two weeks.

Khune will likely be between the sticks against Baroka at Peter Mokaba Stadium tonight (7.30pm) after missing Chiefs' 3-0 win over Free State Stars in the MTN8 quarterfinal on Saturday.

Vries picked up a knee injury in that encounter.

The club took to Twitter to confirm the injury: "Goalkeeper Virgil Vries injured his medial knee ligament and will be out for two weeks."

Communications manager Vina Maphosa confirmed to Sowetan that Khune would be available for selection as Chiefs go in search of their first league win of the new Absa Premiership season. "Yes, Itu will be available for the Baroka game," he said.

Asked why Khune was not available when Chiefs beat Stars 3-0 at FNB on Saturday evening, Maphosa said the shot-stopper "was on leave".

"The games don't differ. The only thing with these games is that they are coming back-to-back and close to each other.

"The approach will be to try to get the first three points as we haven't recorded a win yet.

"The play will be the same but the mentality will be obvious... we need the three points. For the supporters obviously, it's a first game of the season in Polokwane and I am sure they will be the ones to push the team to the first win in the league.

"It is going to be an interesting game and we are expecting a large crowd... Polokwane is one of our strongholds when it comes to support."

Midfielder Joseph Molangoane is facing a lengthy spell on the sidelines after suffering a broken leg in the same game against Stars.

He picked up the injury following a crunching clash with Stars' Makhehle Makhaula.

Chiefs have confirmed that the early prognosis suggests that Molangoane has a fractured lower distal tibia and fibula in the right leg.

Meanwhile, midfielder Siphelele Ntshangase, who suffered a knock to his ankle, has been cleared to play. - Additional reporting by Gomolemo Motshwane