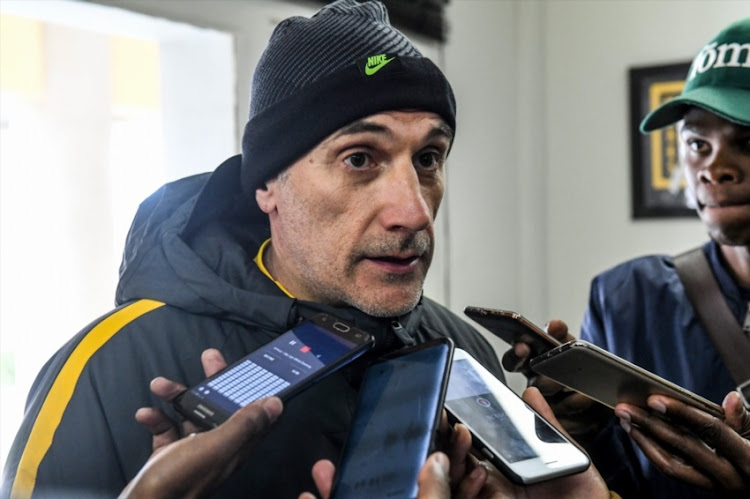 Giovanni Solinas was clearly relieved at his first win at Kaizer Chiefs against Free State Stars‚ but the Italian also knows his situation remains tough after a shortened preseason and little time in-between matches to implement his style.

Chiefs bounced back with a markedly improved 3-0 MTN8 quarterfinal victory against Stars at FNB Stadium on Saturday night‚ though were left counting the cost of Joseph Molangoane’s broken leg.

Molangoane and Dumisani Zuma had injected much-needed mobility on the wings coming in for 30-somethings Bernard Parker and Siphiwe Tshabalala.

For Solinas‚ a place in a cup semifinal‚ and a crucial first win‚ came as a relief amidst early scepticism over his appointment among the Amakhosi faithful.

But the 50-year-old coach knows he’s walked into a tough situation at Soweto giants hungry for silverware after three trophyless seasons.

Add to that his late arrival in the preseason‚ where he had just three weeks to try to stamp his identity on Chiefs‚ and that the games are coming thick and fast at the start of the season‚ leaving little time to continue that work in training sessions‚ and Solinas has his work cut out.

“We need our tactical reading to improve‚ because we need to protect the movements into the big space‚” Solinas said‚ identifying aspects he still sees lacking after a solid win against Stars.

“When we don’t press the second option is ready to drop. Today the guys recognise this tactical situation‚ and it needs to improve.

“It’s a pity we don't have time for training sessions. Because in my opinion that’s what the team needs now.

“Because the training sessions are the instrument for improving the players.

“But‚ you know‚ in two day we play‚ two days we play‚ one day we travel. There is no time for recovery and not time for training sessions.

“So‚ I am sure that when we have the time‚ and we have a normal week‚ and we play two games a week apart‚ we will improve.

“Because the guys in the training sessions put the effort‚ the commitment and the concentration. So this makes me happy‚ and makes me confident for the future.”

It is not an easy situation for Solinas. Clearly he needs time.

Saturday’s performance‚ though‚ indicated the coach has some potential.

Increasingly‚ from Chiefs’ promising 1-1 opening league away draw against Mamelodi Sundowns‚ through the defeat against Wits‚ to beating Stars‚ a gameplan emerges that holds some promise.

The defence looked increasingly organised‚ Siphelele Ntshangase’s reintroduction from the cold‚ and influential role from deep-lying playmaker‚ and Khama Billiat and Leonardo Castro’s reunited Sundowns partnership up-front have all started to look quite good.

In the coming week Chiefs return to league action against Baroka FC at Peter Mokaba Stadium on Tuesday night‚ then face Maritzburg United at Harry Gwala Stadium on Friday.

They then do have a week’s break until the following weekend’s MTN8 semfinals.