I have no mandate‚ says Black Leopards coach Joel Masutha 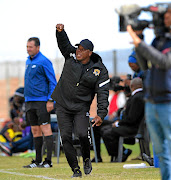 Having spent five years in the NFD since their relegation from top-flight football‚ you would expect promoted Black Leopards to have set early season points’ target in order to lay a solid foundation for survival.

Not under head coach Joel Masutha‚ who watched first in agony and later in glee as Leopards clawed back from two goals down with six minutes remaining to force a 2-2 Absa Premiership draw against fellow-promoted Highlands Park in Tembisa on Thursday.

The 47-year-old former goalkeeper believes setting targets is a bad idea because‚ “It gives you room to fail”.

Asked where he would want to see his team after the first quarter‚ Masutha said: “No‚ we never set any targets. We just take it one game at a time.

“They [targets] give you room to fail. For example if I say I want eight points from five matches‚ it means [I’m prepared] to lose seven points.”

Masutha has had a promising start‚ with Leopards sitting on four points from two matches following their win over Limpopo rivals Polokwane City and earning a valuable away point at Highlands Park.

The Leopards coach said he does not have a mandate from his management‚ although very few will believe him considering his boss and owner David Thidiela is not known for being patient with coaches when results are not going his team’s way.

“There is no mandate except for us to go out there and compete‚” said Masutha.

“We don’t have to come here and disrespect other clubs and say we are going to win the league.

“We will take one game at a time and see where it can lead us. We just want to challenge ourselves to do better.”

Leopards will hope to continue with their good start when they make the long trip down to the Sisa Dukashe Stadium in East London to face Chippa United in their next match on Saturday‚ August 18.