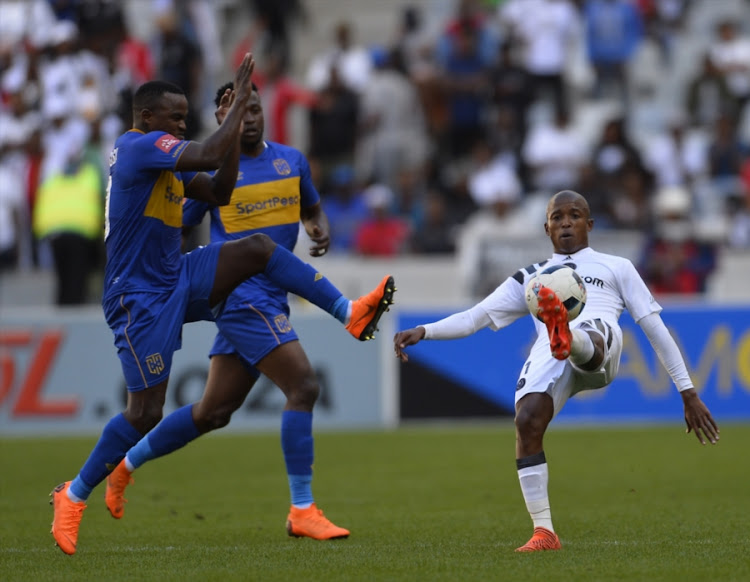 Orlando Pirates winger Luvuyo Memela (R) gets away from two Cape Town City defenders during the Absa Premiership match at Cape Town Stadium on April 28, 2018 in Cape Town, South Africa. Memela picked an injury in this match and has played ever since.
Image: Ashley Vlotman/Gallo Images

Orlando Pirates have been given a boost after the club revealed that winger Luvuyo Memela is nearing full fitness and that goalkeeper Brilliant Khuzwayo’s ankle surgery came through without a glitch.

Memela‚ who finished last season as the club’s top goal scorer coming from midfield positions‚ has been out of action since straining his knee during a 1-0 defeat away at Cape Town City in May.

“He has been working hard in his rehabilitation programme and is now allowed to partake in some team training sessions.

“He is now nearing full fitness‚ which can only bode well for the left-footer and the technical team.”

Khuzwayo was last week ruled out for “three to four weeks” after injuring his ankle at training and missed out Bucs’ 1-1 Absa Premiership opening draw at home to Highlands Park.

“Khuzwayo’s surgery was a success and the goalkeeper is undergoing rehabilitation with the Bucs medical staff‚” the club said.

The department of communications has announced that the SABC will resume broadcasting Premier Soccer League games on radio.
Sport
3 years ago