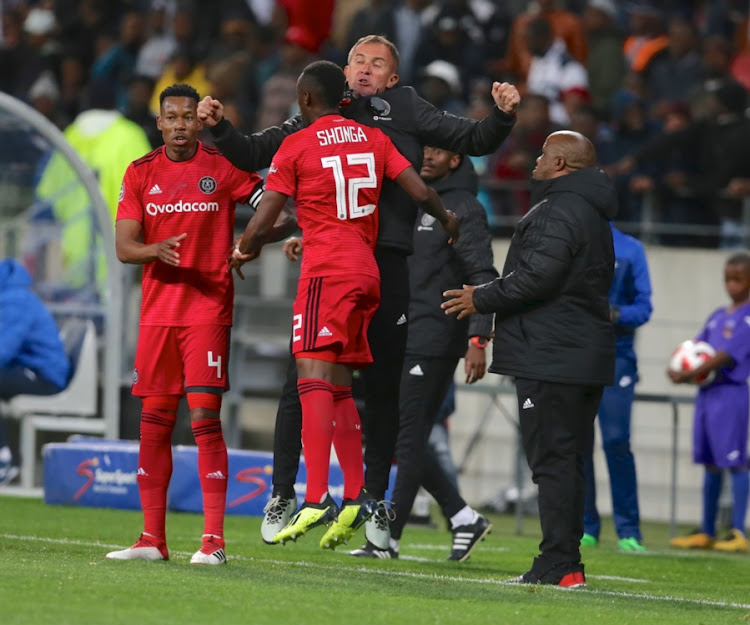 Ten-man Orlando Pirates held out to beat Chippa United 1-0 at the Nelson Mandela Bay Stadium on Wednesday night, taking advantage of an early goal to notch up their first victory of the new Absa Premership campaign.

Justin Shonga hammered a powerful freekick onto the crossbar in the 16th minute and the unfortunate defgener Gerald Modisane, in attempting to clear the rebound, banged the ball right into the back of his own net.

He seemed caught out by it coming back at him with some force and instinctively swung his foot at the ball, serving only to drive it into his own net.

The game was characterised by fervent pressing which allowed very little time for players on the ball and led to a constant turn over of possession, with the high tempo making it seem fevered although it was, frankly, frustrating to watch.

Chippa did well to cut out Pirates’ routes down the flanks and when the Buccaneers had a chance to slip the ball through the middle, they executed too slowly and missed the opportunity.

But it came alive after Pirates had full back Mthokozisi Dube sent off in the 71st minute, opening up the game and seeing more chance created.

Pirates, who dropped Wayne Sandilands after last Saturday’s howler against Highlands Park and put Siyabonga Mpontshane in goal instead, should have extended their lead after a swift set of passes on the left but Mpho Makola got in the way of his team mates’s shot.

Daine Klate was making his full debut for Chippa against his old club and Chippa also had Thabo Rakhale back from abortive trials in Turkey. But neither were able to make much of an impression initially.

Klate’s 49th minute freekick was the first real save that Mpontshane had to make.

But the tied of the game turned after referee Victor Gomes handed an unnecessary red card to Dube. He was cautioned for time wasting which was overzealous from the man in the middle and because he had already picked up a first half Dube had to go for any early shower with some 20 minutes left.

That allowed Chippa to attack for the closing stages and they came close with chances for Kurt Lentjies and Klate, who came close to a debut goal in the 81st minutes with a characteristic hook shot from close range.

Mpontshane also made a fine save near the end to save Frederic Nsambiyumva’s diving header to keep Bucs’ lead intact and help hand them their first three point haul of the campaign.