Kaitano Tembo promises change of strategy from SuperSport against Arrows 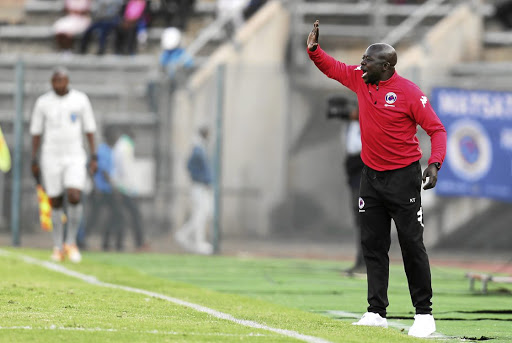 SuperSport United will seek to be more attacking on Wednesday night as they take on AmaZulu in their first home encounter of the season‚ said United coach Kaitano Tembo as he looked ahead to the Absa Premiership encounter at Atteridgeville.

Having played a patient counterattacking game in their opening match of the new season away from home against Cape Town City last Saturday‚ where they lost 2-0‚ the new coach has promised a different approach for the match at Lucas Moripe Stadium.

And‚ he said he was likely to hand English-born centre-forward James Keene a full debut and give Bradley Grobler a rest.

“We will have to be more adventurous at home and will need fresh legs. It’s very difficult for some players now who have just came back‚ like Bradley. He’s missed about eight months of football.

“Saturday was his first game so he cannot play another game in three days. He’ll need a little bit of rest so that is where James comes in‚ as well as 'Tebza' [Teboho Mokoena] coming back from suspension so we’ll have a bit of fresh legs.”

The highly-rated SA Under-20 international midfielder Mokoena was suspended for the clash against City because of an accumulation of yellow cards at the end of last season that left him with a one-match ban.

Grobler last played last year before undergoing surgery on his knee‚ which kept him sidelined.

SuperSport sat back and allowed City possession in Saturday’s clash‚ seeking to catch their hosts on the break. Had they not been caught marginally offside on a few occasions‚ it is a strategy that might have worked.

But after going two goals behind‚ Tembo brought on Keene and Fagrie Lakay‚ back from a six-month loan spell at Ajax Cape Town‚ and turned to a two-man attack.

“They brought an energy to the side‚” he said‚ hinting they could both start against Usuthu.