Benni McCarthy braces for a tough outing against bogey side Baroka 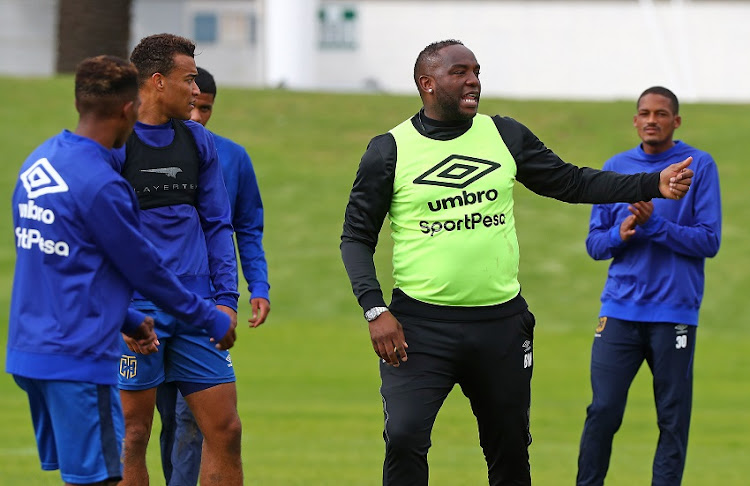 Cape Town City are not going to get too many goal scoring chances when they take on Baroka FC away in Polokwane on Wednesday night predicts coach Benni McCarthy‚ who describes their opponents as their bogey team.

McCarthy describes Baroka as their bogey team but he is also confident that they can changed their luck and come away with the spoils from the match at the Peter Mokaba Stadium.

City lost twice to Baroka last season - away in the league and again in the first round of the Telkom Knockout‚ where they were the defending champions.

Their meeting in Cape Town was a 1-1 draw.

“We are likely to get one chance to make it count.

"They were our bogey team last season. We couldn’t get one over them‚” McCarthy said.

But he said his side would have a much more positive sentiment as they travelled north on Tuesday on the eve of the game.

“We have a new keeper now (Peter Leeuwenburg) who won’t let goals in from shots from 45 to 50 yards out‚” McCarthy added‚ in a reference to the goalkeeping howlers made by Shu-Aib Walters in two of the games against Baroka last season.

They cost Walters his place in the team which has eventually seen him released to move to join neighbours Ajax Cape Town.

“We are more solid in goal and at the back and now we added two strikers.

"Matthew Rusike is a revived man and Shaka (Siphelele Mthembu) has come in and shown his qualities.

“Those were the two areas where we lacked against Baroka last season. I remember being so furious last season that we threw points away and then they also knocked us out of the Telkom.

“They were games which should have been a given for us. We outplayed them but we just couldn’t score. That was the problem.

"And then we suffered silly goals from far.

“But we are backing ourselves this time. I’m positive about it. It should go much better this season.”

Ex-Bafana Bafana midfielder Ayanda Patosi‚ who was left out of City’s opening game match-day squad because of a lack of pace‚ might get to start in Polokwane because McCarthy feels he is able to dictate the tempo of the game in City’s favour.

“It is a game where we will have to keep as much of the ball as possible and try to dictate the pace.”

He was delighted with the impact made by the four new players he introduced for their club debuts last weekend.

Leeuwenburg‚ signed from Ajax Amsterdam’s reserves‚ brought a steadiness and instilled a confidence in the defenders‚ he said‚ while Riyad Norodien (ex-Orlando Pirates) showed an impressive work ethic.

New Ivory Coast defender Kouassi Kouadja‚ previously with clubs in Eastern Europe‚ was aggressive in his tackling and Mthembu proved‚ McCarthy added‚ that he was right to chase him to play for the club.