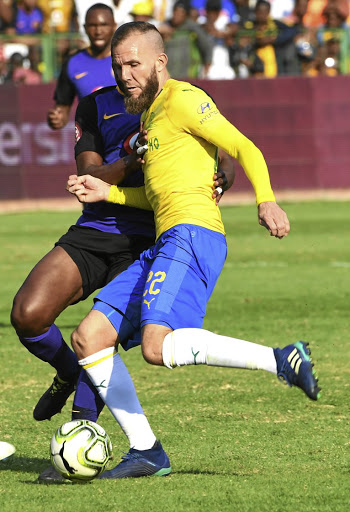 Mamelodi Sundowns striker Jeremy Brockie has shown flashes of what he is capable since his arrival. / Gallo Images/Lee Warren

Mamelodi Sundowns coach Pitso Mosimane believes they are playing to forward Jeremy Brockie's strengths as they seek to replace Percy Tau who was key for the Brazilians last season.

Brockie, meanwhile, is yet to score in an official match since joining from SuperSport United in the January transfer window, but he looked threatening against Chiefs and even had one of his attempts come off the crossbar.

With Tau gone and Khama Billiat having moved to Chiefs, Mosimane is now looking for a solution so Sundowns can continue firing the same way they did last season with 49 league goals, which was
more than any other side.

"JB is getting there, I'm happy with him. He's a different kind of a player and obviously he's not a Percy, not a Khama and we need to play to his strengths, and we are playing to his strengths," Mosimane reflected after his side drew 1-1 against Chiefs at Loftus Stadium at the weekend.

"He played very well. I'm happy with his progression. We must try to put him longer on the pitch for him to score."

Generally, "Jingles" was pleased with the way his team performed, but lamented their poor finishing.

Sundowns's next challenge comes in the form of Polokwane City, the only side to beat them home and away in the league last term.

Mosimane will be seeking an improvement to avoid losing to the Limpopo side again.