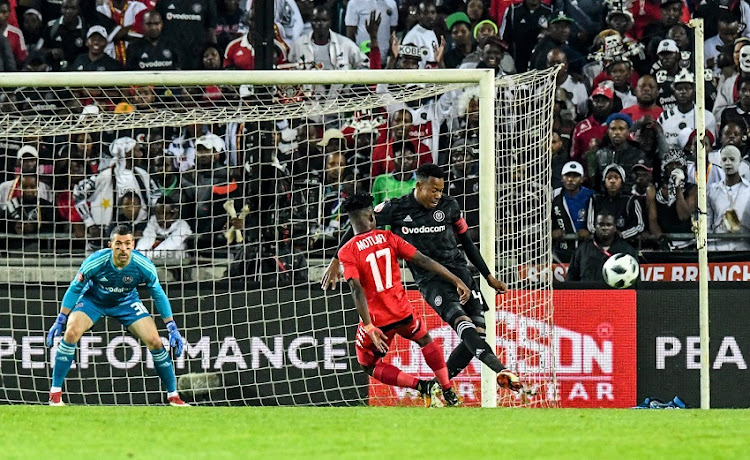 Orlando Pirates rallied around unfortunate goalkeeper Wayne Sandilands in the change room at the break after his blunder in their 1-1 Absa Premiership draw against Highlands Park‚ Bucs coach Milutin Serdojevic said.

Sandilands‚ receiving a back-pass on Saturday night at Orlando Stadium from Gladwin Shitolo in the 15th minute to his right foot attempted to pass out with his left‚ the ball sneaking in under the keeper.

It went down as a Shitolo own goal.

Justin Shonga equalised in the 61st‚ but the blunder was the last thing Sandilands needed playing just his second league game since fumbling in Hlompho Kekana’s shot from Mamelodi Sundowns’ half at the same ground in November.

It also got the home crowd on Sandilands’s back.

“The first thing we did in the dressing room was that we requested that the team stands behind Wayne Sandilands.

"The players stood firmly behind him‚ in order to protect him‚” Sredojevic said after the game.

“It is not easy to come in this position‚ and I don’t wish it on my biggest enemy.

"And I need to inform you that Wayne has worked very hard‚ but football is such a game that these things happen.

“It’s very painful when it happens to you – to us in this case.

"And in the second half we came determined that we would be much better in buildup‚ in penetration‚ last third entrances and creating.

"And much better in defence in order to close the counter-attacks.

“We succeeded to score that goal. Unfortunately the winning goal did not come despite us. We believe we deserved to win this match.

“We need to pick up the pieces‚ analyse.

"We had planned to win this game‚ with respect to a very well organised team of Highlands Park who succeeded without even one shot on target to get the result they wanted.”

Sredojevic said it never came close to crossing his mind to take Sandilands off.

“Before being a coach‚ I am a supporter‚ and I feel like a supporter.

"However‚ some of us as technical people need to be cool people‚ and we cannot react by emotions and whatever you see immediately you cut off‚” the coach said.

“We need to have respect towards our colleague who we have put in goal. It is unfortunate that this happened. We could not change it.

“Yes‚ the supporters were on his back. It was not easy. We just waited for half time to pass.

“In the second half‚ with the team protecting him in the proper way‚ I’m very happy with the way the team reacted and showed that we need to answer any problem as a team.”

Serdojevic seems likely to give Sandlilands – at his best‚ one of the most solid shotstoppers in the PSL – a chance to redeem himself and nurse himself back to form in Bucs’ next game against Chippa United at Nelson Mandela Bay Stadium on Wednesday.