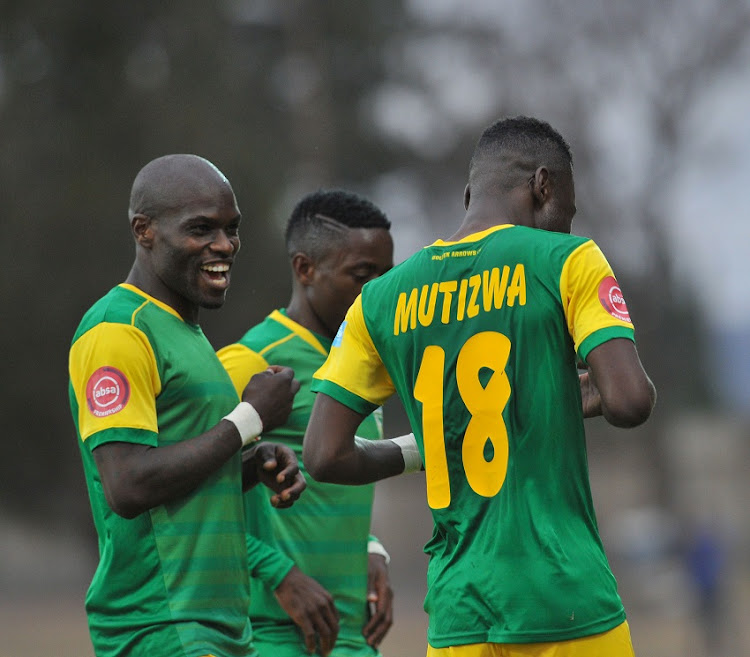 Mutizwa chested a spinning ball and then leapt up to hammer the ball past goalkeeper Richard Ofori for an early contender for goal of the season.

Lerato Lamola added a second in stoppage time for the 2-0 victory to register a first defeat at home for Maritzburg since January.

Arrows put in a workmanlike performance and showed good early season fitness‚ harrying their hosts. But the visitors also did profit from poor finishing by Fadlu Davids’ side.

It was a high tempo affair‚ unusual for this early in the season‚ with Arrows promising they could be spoilers through the rest of the campaign.

The only real chance of the first half fell to the visitors as Danny Phiri headed over from Danny Venter’s freekick in the 26th minute.

Maritzburg had the better of possession but over elaborated with the ball and therefore proving ineffective.

Siphesihle Ndlovu took over the main creative role following the departure of Lebogang Maboe to Mamelodi Sundowns‚ but he was often guilty of holding onto the ball too long at crucial junctures.

Arrows were constantly snapping at the heels of the Maritzburg midfield‚ but they were not as sharp as they have proved on the counter attack.

Straight after the interval it was a long ball that‚ ironically‚ set up the first chance for Maritzburg with Mohau Mokate getting a header in and forcing a stunning save from Nkosingphile Gumede‚ who slapped the ball away like a basketball centre defending his hoop.

Ndlovu profited from a defensive slip to set up an even better chance for Fortune Makaringe in the 57th minute.

His square pass eluded the Arrows defence to find Makaringe‚ who took his time about his finish but as he tried to place it into the net allowed enough time for Gumede to get into position to make another excellent stop.

It was a good chance spurned and would come back to haunt the hosts.

Ndlovu also missed with just three minutes left and will have to look to sharpening for the midweek trip to Bethlehem to face Free State Stars.

In the end‚ a breakaway saw Lamola secure the points although he still needed some clever trickery to shake off the goalkeeper and add his name to the score sheet.