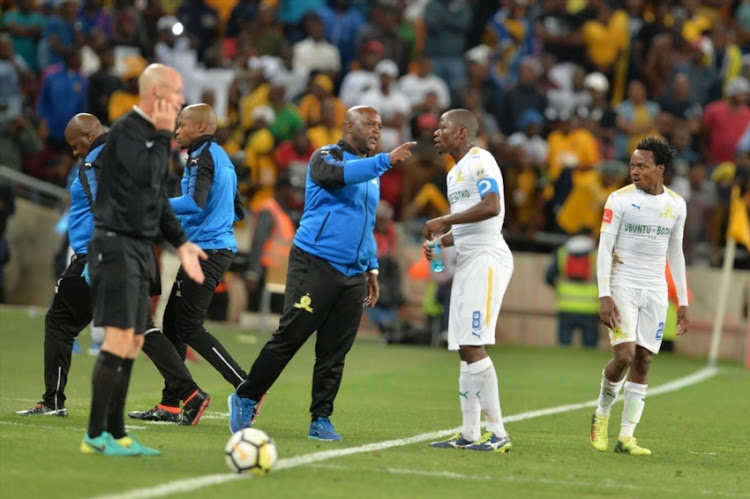 It will be business as usual for Mamelodi Sundowns in the 2018-19 Absa Premiership‚ with or without Percy Tau and Khama Billiat‚ the Brazilians’ captain Hlopmpho Kekana has said.

A few weeks ago‚ on the back of a poor away defeats against Horoya and AS Togo-Port in Guinea and Togo in the Caf Champions League‚ and the loss of Tau to Premier League Brighton and Billiat to Chiefs‚ pundits were predicting a tough start in the PSL for rebuilding Sundowns.

Kekana‚ asked who Downs’ biggest challengers to their title will be‚ did not pick out last season’s runners-up Orlando Pirates‚ who have beefed up significantly in their technical staff and squad.

“I would say ourselves‚” Downs’ skipper said. “We can be our biggest challengers‚ because we can be wasteful in front of goals‚ and you cannot try to win the league or Champions League if you don’t score goals.

“So we’re still in the process of trying to build and trying to rectify some of the things in front of goals. Because we have lost two important players‚ and we just want to try to fit in the new guys‚ to really show them how we play‚ and to challenge them that we need to finish goals.”

Sirino and Brockie’s preseason positive signs could be crucial for Downs as they rebuild from the loss of Tau and Billiat.

“I think it's important‚ and a plus for us to really see those players raising their hands‚ showing that they’re ready to be selected‚” Kekana said.

“It’s a positive that we really need to stick on‚ and try to push them to the limit.

“I think we need them more than ever this season. Because the people who we normally rely on are no longer with us. Look‚ the sooner we gel the better.”

For Downs‚ a fifth pre-season with effectively no break due to their continental efforts will require all the coach Pitso Mosimane and his technical staff’s usual juggling skills to maintain fitness and freshness.

It also meant Downs had little time in the off-season to take stock‚ and perform the necessary rebuilding.

“Well I think we’ve tried. We had three weeks of camp in Rustenburg‚ and I think that was enough for us‚” Kekana said.

“We didn’t have this privilege of preparation before. So for us it’s to try to adapt very quickly‚ because we don’t have time on our side.

“We just have to try and do well for the club. We’ve got a huge responsibility to represent the club well.

“We can’t blame anybody – we just have to do the business for the club.”