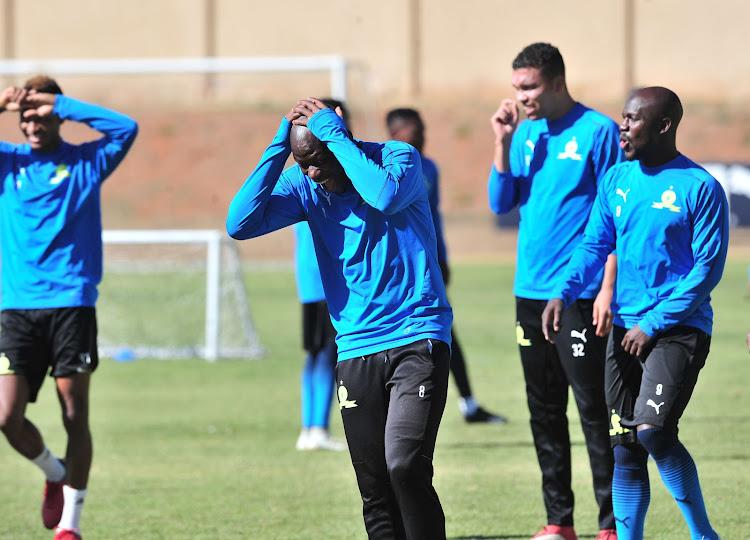 Mamelodi Sundowns captain Hlompho Kekana shares a funny moment with teammates during the team's training session at their base in Chloorkop, Pretoria on July 25 2018.
Image: Samuel Shivambu/BackpagePix

Mamelodi Sundowns captain Hlompho Kekana has said he might have to remind himself to be mean on Saturday against Kaizer Chiefs‚ who some cheeky football supporters have begun to label a “Sundowns Lite”.

Chiefs’ signing of forward Khama Billiat brings to three the stars Amakhosi have poached from Sundowns in the past two-and-a-half years‚ following in the footsteps from Chloorkop to Naturena trod already by right-back Ramahlwe Mphahlele and striker Leonardo Castro.

Chiefs have even had former Downs left-back Mzikayise Mashaba training with them for the past week‚ running the rule over the defender.

Kekana chuckled at the label of Sundowns Lite being bandied around on social media for Chiefs‚ who the Brazilians meet in a big matchup to kick off the 2018-19 Absa Premiership season at Loftus Versfeld on Saturday.

“We’ve lost so many important players to Chiefs that it always pains me‚ because at times I even forget that they’re no longer my teammates‚” Downs’ captain said.

“I still hug them‚ I still talk to them. But on the day I need to be professional and stick to the basics.

“So I need to really take this soft spot that I have for them‚ and try to be mean on the day.”

Star-studded Sundowns start 2018-19 one of the favourites again‚ having not finished outside the top two in six seasons under Pitso Mosimane.

Chiefs are more troubled‚ with an air of uncertainty hanging over Naturena.

After three trophyless seasons under Steve Komphela‚ Amakhosi have a new coach in Italian Giovanni Solinas who has never won a major trophy or completed a season at a club‚ and who arrived three-and-a-half weeks into the Soweto giants’ preseason.

If a massacre is being predicted at Loftus‚ though‚ Kekana is more circumspect‚ aware that recent form has shown that when Chiefs appear to be lambs to Sundowns’ slaughter‚ they often rise to a credible performance.

“We are always scared to play against Chiefs. As you know‚ playing Chiefs is not an easy task for us‚” Downs’ captain said.

“But we’ll try and do well for the people watching. Because for us its a business that we really need to run on the day.

“We will try to win the match even though it’s not going to be easy.”

Chiefs ended in third place in 2017-18. Sundowns were champions.

Bafana Bafana midfielder Bongani Zungu could be on course for a reunion with his former coach as a 7-million euro move to Greek giants Olympiakjos is ...
Sport
3 years ago
Next Article