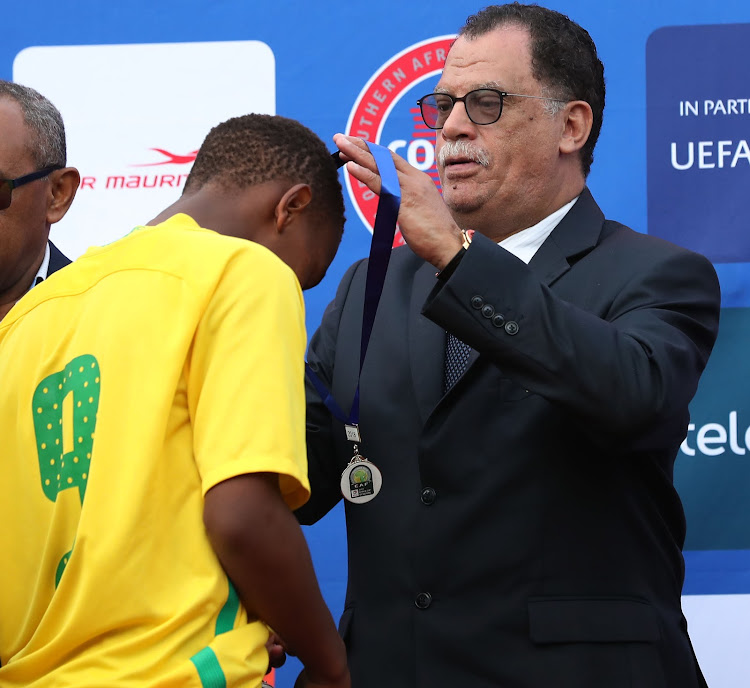 The SA Football Association (Safa) President Danny Jordaan hands out the losers' medals during the Cosafa Under 17 Youth Championships Final match between South Africa and Angola at the Francois Xavier Stadium in Port Louis, Mauritius on July 29 2018.
Image: Gavin Barker/BackpagePix

Just days after South African Football Association (Safa) president Danny Jordaan had trumpeted the junior national teams’ ability to qualify for major tournaments‚ the Under-17 side have fallen short of their goal of reaching their continental finals.

South Africa lost 1-0 to Angola in the final of the 2018 Cosafa Under-17 Championships on Sunday in a game in which they failed to create much in the way of attacking opportunities.

Angola now move forward to represent the Southern African region at the 2019 African Under-17 Championships in Tanzania‚ which in terms serves as a qualifier for the World Cup in this age-group in Peru.

For South Africa that dream is now over and they must start building again‚ but coach Molefi Ntseki says he remains pleased with the progress that has been made and conveyor-belt of talent he has been able to provide for Thabo Senong’s Under-20 side.

“It is a disappointment‚ but life goes on‚” Ntseki said.

“For us as a country‚ we must look forward and correct some of the experiences that we came up against in this tournament.

The players tried very hard and did their best‚ but this is the third time unlucky for us as an Under-17 team.”

Ntseki says it is gratifying to see the players that he took to the 2015 Under-17 World Cup in Chile now making the step-up in the next age-group level.

That includes helping South Africa to beat Malawi and qualify for the African Under-20 Championship in Niger next year.

“Ever since I started as the Under-17 coach we have been doing well‚ with the team preparation and having gone to the World Cup.

Striker parts ways with Turkish side.
Sport
3 years ago

"Seventy percent of those boys who went to the World Cup [in 2015] are now playing for the Under-20 national team.

“And 20 percent of the players who were here last year [at the Cosafa tournament] played a leading role against Malawi‚ one of them‚ Thabiso Monyane‚ even scored.

“It is a good conveyor-belt in terms of us unearthing talent in the Under-17 level‚ developing them and placing them in the Under-20.

“The future looks very good for us in terms of what we have in the Under-17. It was just unfortunate for us not to have won this match and potentially going forward to Peru‚ because for us that was the ultimate [goal].”