Amajimbos: It's all in our hands 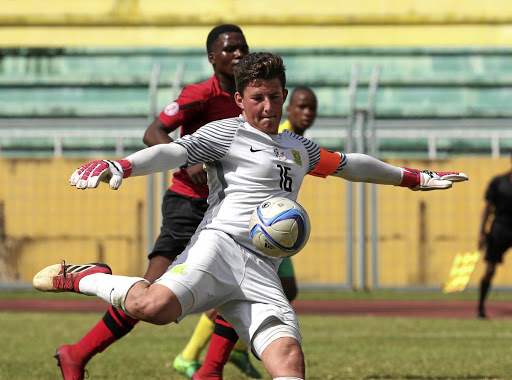 Amajimbos are just two steps away from the Africa Cup of Nations (Afcon) qualification but the SA Under-17 first have to beat Mauritius in the Cosafa Cup semifinal today to carve their own path.

Coach Molefi Ntseki's charges face hosts Mauritius (12.30pm kick-off) in the opening fixture of the last four of the regional tournament that serves as a qualifier to the Afcon finals next year.

Namibia will meet Angola in the other semifinal (3.30pm), also today.

At stake for the champions in the final in Port Louis on Sunday is an automatic berth for the youth continental showpiece to be staged in Tanzania in May.

With a caution of not getting too much ahead of themselves, the golden ticket is what Amajimbos captain and keeper, Constandino "Costi" Christodoulou, and his teammates are yearning for.

"We came in with the objective of winning the tournament and right now we are in the semifinals and we are also closer to reaching Tanzania and ultimately Peru at the [2019] World Cup," Christodoulou said.

The skipper admitted the standard has been high, pointing at their opening goalless group match against Lesotho as an example of how favourites laboured against unfancied sides.

"We struggled to find the back of the net against Lesotho but it showed how capable we were, bouncing from a goalless draw and scored four against Mozambique. [4-1 win]"

In clinching Group B, SA edged Zambia 2-1 midweek to set the clash against a Mauritius side that progressed as the best runner-up across the three groups.

As for the game against the hosts, Christodoulou said: "We have been to international tournaments before and we know we have to be mentally strong. "

The Maritzburg United goalie is one of the remaining five members of the Amajimbos side that was knocked out by the islanders on the same stage of competition last year. He said it's up to Amjimbos to emulate the Under-20 and Banyana Banyana who have qualified for their respective Afcon finals.