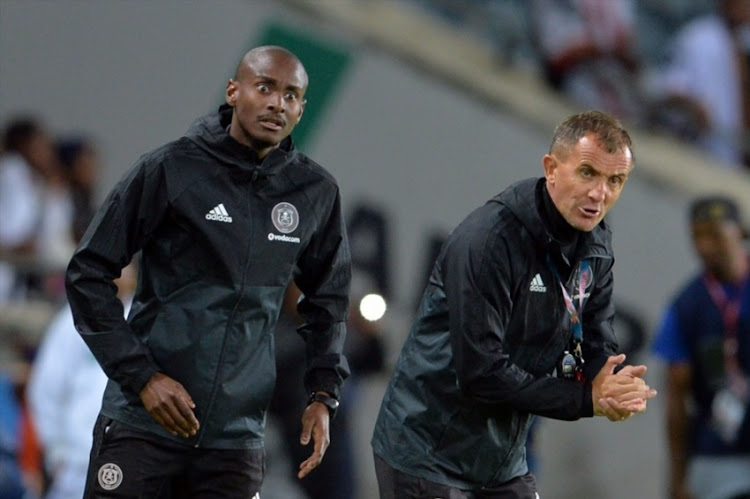 Orlando Pirates’ “chefs”‚ coaches Milutin Sredojevic and Rhulani Mokwena‚ have been cooking up a delicious meal of football to serve up to their supporters when their season kicks off against Highlands Park at Orlando Stadium on August 4‚ Sredojevic has said.

With the kickoff now just 10 days away‚ Pirates have managed perhaps the most secretive off-season of South Africa’s big three.

Last season’s runners-up‚ tipped by many as favourites for the 2017-18 Absa Premiership‚ played a string of friendlies in Zambia.

Big three rivals Kaizer Chiefs and Mamelodi Sundowns have been involved in the televised pre-season Maize and Shell Helix Cups‚ and Downs in the Caf Champions League.

Sredojevic said the last 10 days of Bucs' off-season are about polishing.

His eight weeks of pre-season contrasts to his arrival at Bucs from the Uganda national job just two weeks ahead of the 2016-17 campaign.

“We are in the last part‚ the polishing part‚ of preparing for the competitive season‚” the coach said.

“We are happy that we now need to do the last polishing issues in man-management‚ partnerships‚ triangulation‚ in departments throughout the team.

“We are looking forward to fulfilling our mission of having a proper preseason.

“It is my and coach Rhulani’s first preseason together. Everything has gone well.”

Sredojevic was asked if Pirates’ less visible‚ perhaps purposefully low-key preseason‚ had helped guard the recipe he had been cooking for 2018-19.

“We count ourselves like we are in the kitchen‚ we are cooking‚ and the consumers – our supporters – are waiting for [the meal] to be brought to the table‚” the coach said.

“You know‚ food is more delicious when you want it so much‚ and then it’s brought. If you get to try some before maybe it won’t be that much delicious.

“So we will do our best to prepare a very delicious food from the point of view of results and performance ahead of us.

“But we are not here to promise so much. We are looking to focus on those details.

“Rather let the football talk. And we are looking forward to football that will talk.”

Pirates had a strong second half of last season – winning 11 of 15 games‚ drawing two and losing two.

Along with some interesting signings and solid additions to the technical staff‚ this has raised hopes of a strong title and trophy challenge from a team who have not won silverware since the 2014 Nedbank Cup.