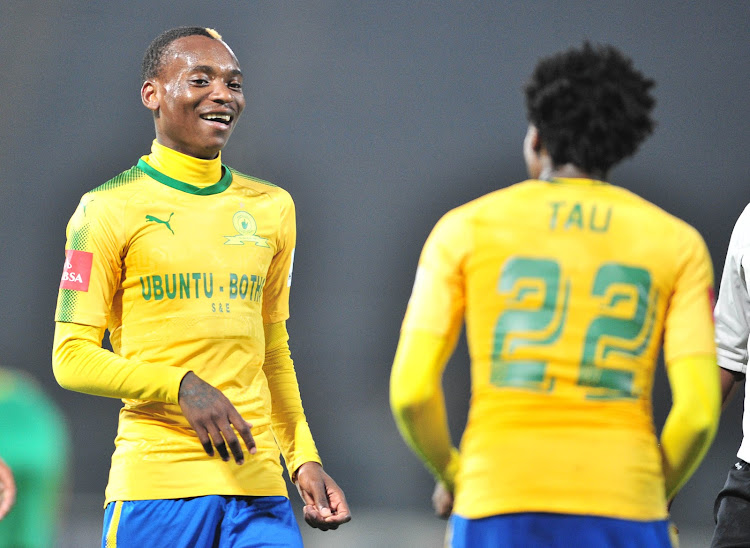 Percy Tau celebrates a goal with teammates Khama Billiat of Mamelodi Sundowns during the Absa Premiership match against Baroka FC at Lucas Moripe Stadium, Pretoria on December 5 2017. The pair have since left the club for Kaizer Chiefs and EPL side Brighton Hove & Albion.
Image: Samuel Shivambu/BackpagePix

Mamelodi Sundowns coach Pitso Mosimane has challenged some members of his squad to take advantage of the high profile exits of star players Khama Billiat and Percy Tau.

The departure of the two players could impact negatively on the Brazilians in the coming weeks as they will continue their attempt to regain the Caf Champions League while at the same begin their defense of the domestic league title.

Sundowns are in a spot of bother in the Champions League as they have to win their remaining matches to stay in contention after they lost 1-0 to AS Togo-Port last week. They remain rooted to the foot of the table in Group C with two points from three matches.

Mamelodi Sundowns need to sign three more players‚ Brazilians coach Pitso Mosimane said‚ even though he had just witnessed a display of his side's ...
Sport
4 years ago

“We have lost influential players in Khama and Percy and we can’t fix that in a day of two‚” Mosimane said.

“People have to raise their hands.

"I want somebody to say I am taking that position of Khama or of Percy.

"They have the ability.

"We have players who can do that and I want them to raise their hands.

"This is an opportunity for those who have been here and saying I am not playing.

"The spaces are open and let’s see if guys will take the opportunity.”

Sundowns have taken Bongani Zungu‚ Keegan Dolly and Tau to Europe in the last three season and Mosimane said he was proud that they have developed players good enough to play in some of the best league in the world.

“It will take time to replace those guys but what I like is that we have taken players to the top five leagues in Europe and it has not been happening in South Africa‚" he said.

"Even though it is destabilising us‚ we are proud to be exporting players.

"I am always looking to replacements and it is a tough thing.

"It takes my holidays away because I am looking everywhere for players to replace them. But when my team is settled I will go on holiday.”

Other players who will be looking to impress and fill the holes left by Billiat and Tau are George Lebese‚ Aubrey Ngoma‚ Thokozani Sekotlong and Lucky Mohomi.

Mosimane admitted their depth is going to be tested in the coming months.

“We have to keep the ball rolling and get momentum‚" he said.

"You understand that we have a season that I have never had before.

Kaizer Chiefs' assistant-coach Patrick Mabedi has said that the team are content with squad that they have.
Sport
4 years ago

"The whole group must be functioning and getting game time because you can’t play 28 games before May‚ which includes the Champions League‚ the PSL‚ cup competitions and international matches.

“It is a marathon but we have been doing this comrades for the past five years and what is important for us is the Champions League and the PSL because they are the two major trophies.

"But at the same time‚ you can’t say you don’t want to win cup competitions.

"It is going to be about training and match management..... all those small components that are in between the lines and you don’t see.

"You have seen in the past that people went all the way to the finals and then they come back home with no legs.

"I prefer to gain momentum with time‚ but that does not mean you are not going to win anything.

"The league is 30 games and Champions League is something else.”

South Africa beat Malawi to qualify for 2019 Africa U-20 Cup of Nations which will take place in Niger.
Sport
4 years ago
Next Article