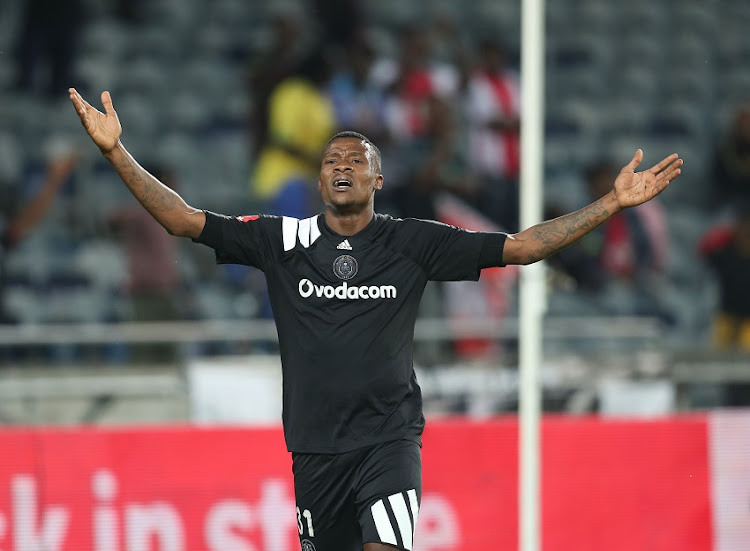 After a solid preseason and some introspection‚ divisive Orlando Pirates striker Thamsanqa Gabuza is promising the Buccaneers goals this season.

Gabuza‚ who scored only four goals in 20 league matches last season‚ says he is in good mental and physical shape following Bucs’ preseason preparations that stretched to Zambia‚ and that he can’t wait for the campaign to start.

“When you play for a big team like Orlando Pirates‚ you must deliver and that is what I want to do in the coming season‚” Gabuza said at the club’s awards function in Johannesburg on Thursday night‚ where midfielder Musa Nyatama won Player and Players’ Player of the Season.

“If you don’t deliver‚ there will always be things said about you. I am a Pirates player‚ I am in the coach’s plans for next season and the only thing I can say is that more goals are coming from me next season.”

Since he joined the Buccaneers in 2013 from Golden Arrows Gabuza has enjoyed a turbulent relationship with the hard-to-please Pirates fans‚ but he is keen to make them happy.

“Fans of big clubs fact are not patient and I understand where the Pirates fans are coming from. I am playing for a big team and I know that as a striker I must deliver goals.

“I have been through a good preseason‚ I am confident‚ I am determined to work more than last season and‚ like I said‚ goals will come this season.”

So determined is he to impress this season that Gabuza has done individualised training during the off-season where he focused on fitness and the finishing skills that have let him down on many occasions.

“Last season I did not play much and during the off-season I did a lot of introspection where I asked myself what I want to achieve as a striker and footballer.

“I didn’t just sit there but I had individual training to work on my finishing. It was not going to be good to sit at home and do nothing while I have some issues that need to be improved.

“If you look at Pirates last season‚ most of the players who scored were midfielders‚ but I want to push so that I can improve myself.

“I am still the club’s leading goal-scorer in Africa and I want to continue where I left off this season on the continent.

“I am more confident because I have been doing well at training and during friendly matches where I worked hard with the coaches on my finishing.

“Last season I was not good in front of goals because I missed too many chances but I am working on fixing those mistakes. I am good to go and really looking forward to the start of the season‚ and to contributing to the team.

“I speak a lot with my teammates and they encourage me to be calm when I find myself in good positions‚ because last season I only managed to score four goals. Some of the players stay with me after training to practice finishing.”