Gauteng vow to defend U21 title despite overhaul 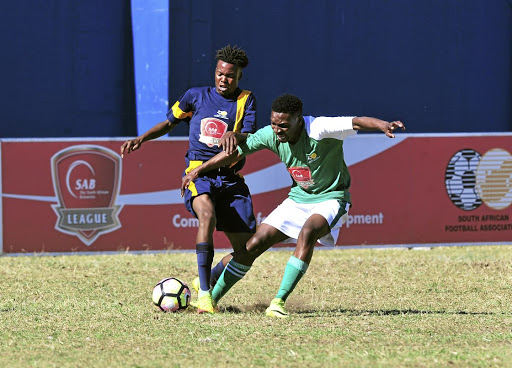 Thamsanqa Mthimkhulu of Gauteng gets the better of a Free State player in the SAB U21 Champs at King Zwelithini Stadium yesterday.
Image: Samuel Shivambu/BackpagePix

SAB Under-21 National Championships title holders Gauteng are capable of defending the crown despite having overhauled their triumphant team from last year, coach Mandla Zwane insists.

Kaizer Chiefs' Yusuf Bunting is one of only three players Zwane has retained from last year.

Gauteng began their title defence on a high after outwitting Free State 2-0 on the opening day of the championships at King Zwelithini Stadium in Umlazi yesterday.

Itumeleng Khiba and Thamsanqa Mthimkhulu were on target for Zwane's charges.

Mthimkhulu walked away with the R1000 prize after his man-of-the-match display.

The junior Amakhosi marksman finished as the top scorer and player of the tournament last term.

"Yes, we are a new team but I see that as a positive thing because there'll be no complacency. I am confident we'll defend this title," said Zwane.

"These new players want to be seen. For them this tournament is a big platform to showcase what they have. They are hungry for a chance at a higher level.

"I have told them that there might be scouts here watching them and that improves their performances."

The tournament started yesterday and the final is on Sunday. It features all nine provinces and the University Sports SA (USSA) team, making it a 10-team contest.

Gauteng hope to build on yesterday's victory when they clash with host province KwaZulu-Natal at 9am today.