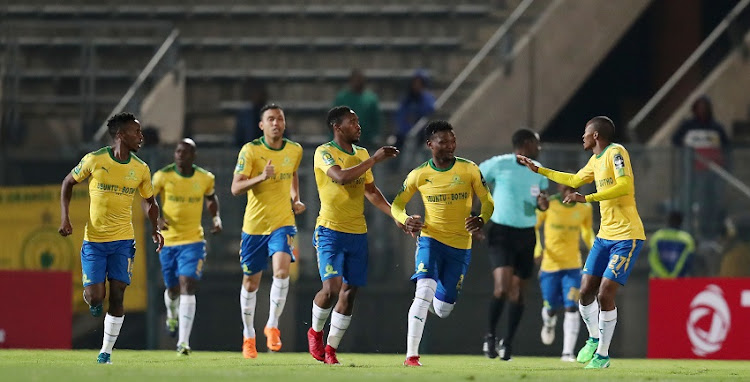 Sibusiso Vilakazi of Mamelodi Sundowns celebrates goal with teammates during the 2018 CAF Champions League match between Mamelodi Sundowns and Wydad at Lucas Moripe Stadium, Atteridgeville on 05 May 2018.
Image: Muzi Ntombela/BackpagePix

Mamelodi Sundowns’ stuttering African Champions League campaign hit a new low in Lome on Tuesday when they slipped to a disappointing 1-0 Group C loss to AS Togo-Port to continue their winless streak in West Africa.

The South African champions were desperately poor as they showed little urgency at times and were far too wasteful in possession‚ their fate sealed by a first half strike from Ayi Hunlede.

The match was played on a bumpy artificial surface with exaggerated bounce that made the ball difficult to control for the Sundowns players‚ but they will see this as three points lost against a Togo-Port side that showed little quality themselves.

Sundowns have just two points from their opening three matches in the pool and next host Togo-Port in Pretoria on July 27‚ a fixture that will be a must-win if they are to keep their fading hopes of a quarterfinal place alive.

Coach Pitso Mosimane handed a debut to Bafana Bafana midfielder Andile Jali‚ with Anele Ngcongca at right-back and Thapelo Morena on the right side of midfield.

Wayne Arendse and Ricardo Nascimento were the centre-back pairing‚ while Sibusiso Vilakazi led the attack with New Zealand striker Jeremy Brockie left on the bench.

Hunlede found a first real sight of goal midway through the opening period but blasted his shot high and wide.

Sundowns’ best opening of the first half fell to Oupa Manyisa‚ who was released in the box by Hlompho Kekana‚ but as he delayed his shot the angle narrowed and home goalkeeper Jean-Robert Klomegan was able to save.

The home side grabbed the lead five minutes before the break as a shot was deflected off Nascimento and into the path of Hunlede‚ which played him onside‚ and as the defence stood still‚ he fired past Sundowns goalkeeper Denis Onyango.

Mosimane brought on Thokozani Sekotlong for Kekana at halftime and within seconds the forward found himself one-on-one with Klomegan‚ but was unable to beat the goalkeeper.

Vilakazi was next to find himself with just the keeper to beat‚ but again Klomegan spread himself well to deny the Sundowns attacker.

Tebogo Langerman tested the keeper with a long-range free-kick and from the resultant corner saw his shot smash into the post.

The match was a sixth in West Africa for Sundowns in history and still they are waiting for their first win.