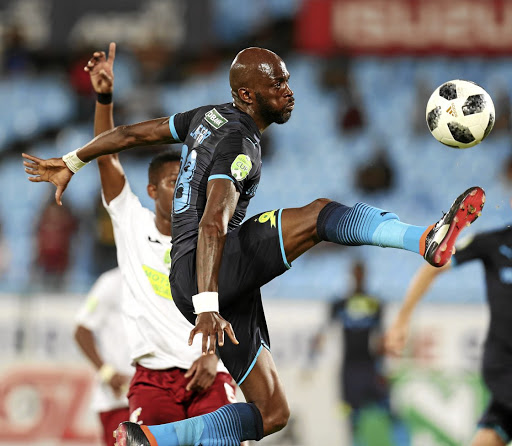 Anthony Laffor of Sundowns says he expects a physical approach from AS Togo-Port in Lomé this afternoon.
Image: Muzi Ntombela/ BackpagePix

Mamelodi Sundowns are still looking for their first win in Group C as they take on AS Togo-Port in the CAF Champions League at the Stade Municipal in Lomé, Togo, today (3pm SA time).

The challenge facing the Brazilians, who have two draws from two outings, is that they are missing a couple of influential players in Percy Tau and Gaston Sirino.

Tau is expected to finalise a move to English Premiership side Brighton & Hove Albion, while Sirino is suspended.

Sundowns are third in the group with two points behind Wydad Casablanca and Horoya, while Togo-Port are at the basement having suffered two losses.

On paper, the Tshwane side have a good chance of collecting maximum points in Lomé.

But winning matches on the road on the continent is easier said than done, though the 2016 champions' head coach Pitso Mosimane has maintained that his charges are still good enough to win without Tau and Sirino.

On a positive note, midfield workhorse Andile Jali, who signed for the club recently, is registered for the tournament and is available.

"It's a good thing that I am back in the country and I am playing for a team that's in the Champions League," Jali told the club's website.

Togo-Port are not in the best of forms - with six defeats in their last 10 matches.

They are participating in the Champions League for the first time since they were formed two years ago.

Sundowns forward Anthony Laffor said he expected a physical approach from the West Africans, but he's not overly worried about the opposition, especially because he's encouraged with the way Sundowns have prepared since arriving in Lomé last week.

"The good thing is that the pitch we are playing on is the one that we've been training on, so everything has been going well," Laffor commented.