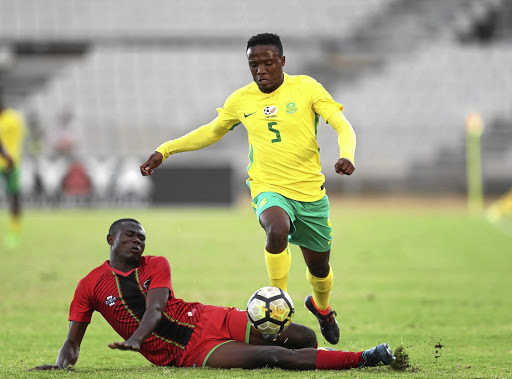 Khanyisile Mayo of Amajita is tackled by Kelvin Kadzinje of Malawi during their Afcon qualifier.
Image: Muzi Ntombela/ BackpagePix

The SA under-20 team's hopes of qualifying for next year's Africa Cup of Nations (Afcon) are hanging by a thread after failing to score in the final round of the qualifiers against Malawi at Moruleng Stadium on Sunday.

The 0-0 stalemate on home soil put Amajita at risk of failing to qualify for the next edition of the African Youth Championship to be hosted by Niger.

Thabo Senong's charges must turn the tables in the return leg on Saturday.

As tough as it looks, Senong appears to be optimistic his troops can still book their ticket to Niger. The Amajita mentor banks on their cogent away record.

"The game is not yet over, this was like a first half, the second half will be in Malawi."

For their uninspiring display in Rustenburg, Senong, 37, bemoans lack of luck and their bluntness in front of goals. "Luck was not on our side. Nothing went wrong because we did not concede and we had moments where we dominated."

The tournament takes place from February 24 to March 10.