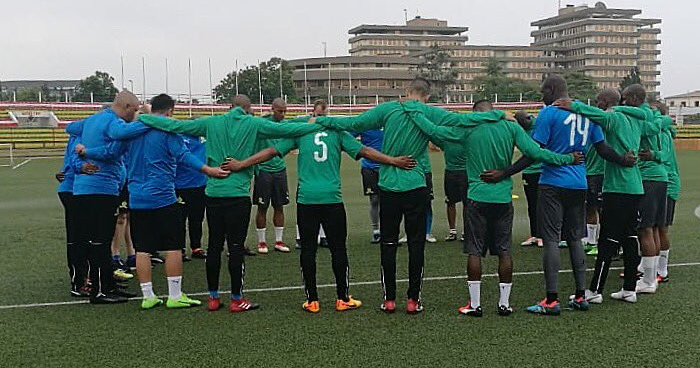 Mamelodi Sundowns' in a group chat during a training session in Lome, Togo, on Monday July 15 2018 ahead of the clash against local giants AS Togo-Port.
Image: Mamelodi Sundowns FC via Twitter

Mamelodi Sundowns will have to create a piece of club history if they are to beat AS Togo-Port in their Caf Champions League Group C clash in Lome on Tuesday.

The Brazilians have played 109 previous matches in African club football over the years‚ but have never tasted victory in West Africa‚ which has been a particularly unhappy hunting ground for the side.

South African teams traditionally struggle in that part of the continent and it has been no different for Sundowns‚ who even lost twice there in their Champions League-winning season of 2016.

In fact‚ South African club sides have travelled to West Africa for 32 matches in all competitions and only come away with four wins‚ remarkably all for Orlando Pirates.

Mamelodi Sundowns will be hoping for a return to goal-scoring form for New Zealand striker Jeremy Brockie‚ whose drought in the opposition box is ...
Sport
3 years ago

Their most famous was the 1-0 success over ASEC Abidjan in the second leg of the 1995 Champions Cup trophy that saw them crowned continental champions‚ but they have also beaten Ghana side Hearts of Oak‚ and Guinea outfits AS Kaloum and ASM Sangarendi.

But aside from that it has been a tale of woe for PSL clubs in that part of the world.

Sundowns will be expected to defeat a Togo-Port side that are considered pool minnows‚ have already lost two matches in the group and will be without their two best defenders through the suspension of captain Issifou Bourahana and the sale to French side Lille of Hakim Ouro-Sama earlier this month.

But they must go against history to do it‚ with Sundowns’ previous five visits to West Africa having yielded no joy.

They were hammered 6-1 by Ivorian side Africa Sports in the group stages of the 2000 Champions League and lost 2-0 to Nigerian side Julius Berger a year later when they were losing finalists.

It would be another 15 years before they returned to that part of the continent‚ where they met Ghanaian side Medeama SC when they dropped into the African Confederation Cup in 2016 before being restored to the Champions League after the disqualification of AS Vita Club.

Sundowns lost 2-0 to the Ghana side as they went down in that tie on the away goals rule.

They later travelled to Nigeria to face Enyimba in the Champions League pool phase and lost that match 3-1‚ though with their semifinal place already secured‚ they fielded a second-string side.

Their most recent visit to the region was in May when they face Guinea side Horoya in their second pool match of this year’s competition and were held to a 2-2 draw.

The good news for coach Pitso Mosimane is the side has won four out of their four home matches against West African opposition down the years and will expect to brush aside Horoya this season when they host them on August 28.