WORLD CUP DIARY: 'Uruguay without Cavani is not the same thing' 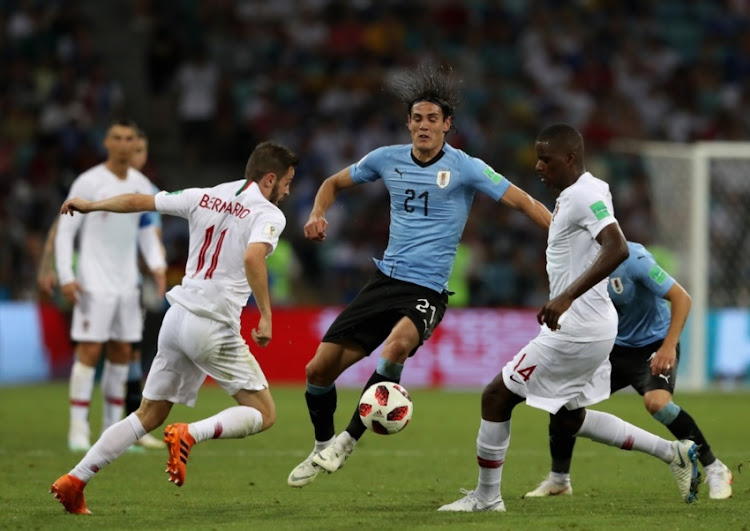 Edinson Cavani of Uruguay is challenged by Bernardo Silva of Portugal and William of Portugal during the 2018 FIFA World Cup Russia Round of 16 match between Uruguay and Portugal at Fisht Stadium on June 30, 2018 in Sochi, Russia.
Image: Francois Nel/Getty Images

The quarterfinal line-up is complete at the 2018 World Cup as we head into a two-day break before those matches start on Friday.

We have news from Uruguay‚ Sweden‚ France and a sign of the dominance of Europe and South America growing stronger.

Uruguay have suffered a potential blow with the news that striker Edinson Cavani is likely to miss training ahead of the World Cup quarterfinal against Argentina on Friday.

That makes him a major doubt for the clash in Nizhny Novgorod‚ which would be a huge blow to the South Americans’ chances‚ according to France midfielder Blaise Matuidi‚ who was a teammate of Cavani’s at Paris St Germain.

“Uruguay without Cavani is not the same thing. You don’t easily replace one of the best attackers in the world. It would be a handicap for them‚" Matuidi said.

“But their way of playing and defending‚ won’t change too much I don’t reckon.”

“I do not know if they are bluffing (about the injury). That’s for the Uruguayans to worry about. But there are injuries that can be quickly healed and others for which there is no miracle cure.”

The World Cup in Russia is perhaps further proof that Europe and South America are moving further ahead in global football as all eight quarterfinalists come from those two confederations.

Africa‚ Asia and North/Central America have already seen all their competitors ousted‚ leaving six representatives from Europe and two from South America.

And that is without the usual suspects from those regions‚ Spain‚ Germany‚ Portugal and Argentina‚ who also went home early.

The two South American sides could yet claim the trophy though as Brazil meet Belgium in a quarterfinal on Friday‚ while Uruguay play France earlier the same day.

England’s victory over Colombia on Tuesday night has seen many from that country believe the World Cup trophy is “coming home’‚ as they like to suggest‚ in what would be a first triumph for the side since their win on home soil in 1966.

But their quarterfinal opponents Sweden have other ideas and after coming through a tough last 16 clash with Switzerland‚ are ready to wield the ax over the English.

"Bring them on. Most of them have respect for us and we feel secure regardless of who we meet‚" striker Marcus Berg said.

Midfielder Gustav Svensson says there is no side in the World Cup who will fancy meeting the Swedes.

"I don't think their players want to meet us. We have shown time and again that we are a team that no-one wants to meet‚ a team that allows very few goal chances‚" he said.

"If you ask their players‚ I don't think any of them will want to meet us."

Real Madrid have moved to deny reports that they have made an offer for French sensation Kylian Mbappe.

A Twitter user‚ Baptiste Ripart‚ made the claim that the club had offered a world record €272-million (R4.35-billion) for the teenager‚ who has been a star of the French side at the World Cup.

The Spanish press picked up the story and ran with it‚ which had promoted a response from Real.

"Given the information published ...regarding an alleged agreement between Real Madrid and PSG for the player Kylian Mbappe‚ Real Madrid would like to state that it is completely false‚" the club said in a statement on their website.

"Real Madrid has not made any offer to PSG or the player and condemns the spreading of this type of information."

Further proof that people will analyze anything comes in the form of what is considered a significant sideshow to the World Cup – the battle over which jersey sponsor will come out on top.

The favourite at the quarterfinal stage appears to be American brand Nike‚ who make the jerseys for Brazil‚ France‚ England and Croatia‚ potentially the four most likely winners of the competition remaining.

Their major rivals adidas make the jersey for three other quarterfinalists – Belgium‚ Russia and Sweden – while the eighth side in the competition‚ Uruguay‚ are sponsored by Puma.

It may seem a trivial matter but is potentially worth hundreds of millions of Dollars to the companies‚ especially Nike.

"While Adidas dominates the European leagues and the U.S. professional league‚ certainly any market share that Nike can pick up in a nontraditional U.S. sport can only bode well for the stock price and brand‚" Jake Dollarhide‚ who is chief executive officer of Longbow Asset Management‚ told Reuters.