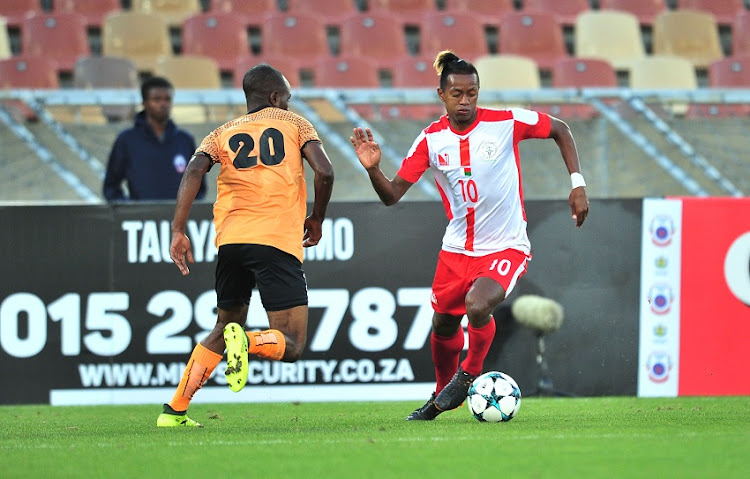 Andriamirado Andrianarimanana of Madagascar challenged by Martin Sikaonga of Zambia during the 2018 COSAFA cup semifinals match between Zambia and Madagasca at Peter Mokaba Stadium, Polokwane on 06 June 2018.
Image: Samuel Shivambu/BackpagePix

Madagascan attacking midfielder Andriamirado Andrianarimanana‚ more simply known as Dax‚ is likely to link up with Kaizer Chiefs in the next week‚ SowetanLIVE understands.

The 27-year-old has been involved in a dispute between Chiefs and his Malagasy side Fosa Juniors‚ with both claiming he has an active contract with them.

Chiefs had threatened to take the matter to FIFA and have the player banned for two years if Fosa Juniors’ claim that he is contracted to them until 2020 were true‚ as the Soweto side signed a pre-contract with the player last month.

But SowetanLIVE understands that the Malagasy have relented and will release the player now that they have completed the first phase of their league season.

Dax played for the club on Sunday‚ despite officially being a Kaizer Chiefs player from July 1‚ but they now have no matches in the foreseeable future.

Madagascan side Fosa Juniors are still waiting for contact from Kaizer Chiefs over the transfer of their playmaker Andriamirado Andrianarimanana‚ ...
Sport
4 years ago

The player must also sort out his visa and other paperwork before he can join Chiefs for training‚ which is expected to happen this week.

Fosa Juniors had always expressed a willingness to sell the player to Chiefs‚ but the Soweto side believed they had captured him on a free transfer.

That is because the Malagasy league is an amateur competition and therefore he was essentially a free agent.

But Fosa Juniors stated that they pay their players as professionals and therefore were entitled to a transfer fee.

This publication made repeated attempts to reach Fosa Juniors officials in the last 48 hours with no response.