The clubs who Platinum Stars have joined in SA's football graveyard 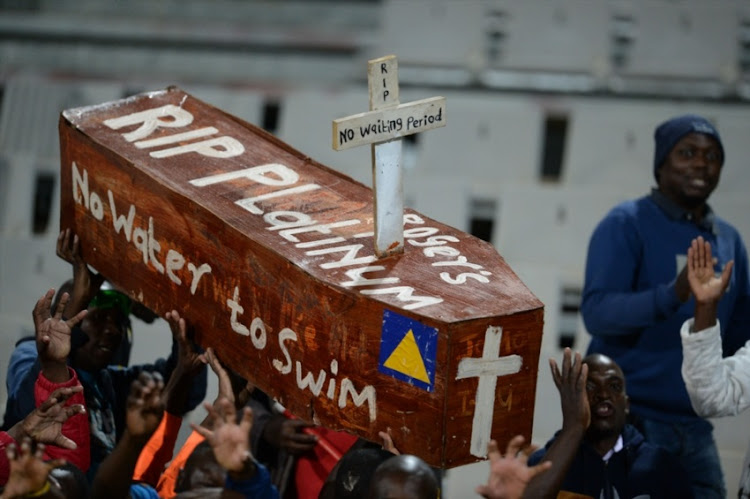 The news that Platinum Stars will cease to exist from next season brings to an end the all-too brief history of one of the more successful clubs outside of the so-called ‘Big Three’ in the Premier Soccer League.

Stars were Telkom Knockout winners in 2006 and 2013‚ and also collected the MTN8 title five years ago‚ as well as having two runners-up finishes in the Absa Premiership.

They also twice represented South Africa in Caf club competition‚ famously defeating Egyptian giants Al Ahly in 2008 when no other PSL side could match the North Africans.

But now they are to go the same way as a number of other former top-flight clubs who have either disappeared altogether‚ or drifted into obscurity.

SowetanLIVE takes a look back at some of the more memorable names that are no longer part of our football lexicon.

Wanderers are among the oldest club’s in the country and claim they were formed in 1906. The Durban side won promotion to the top-flight for the 1997/98 season‚ but went down immediately the next year.

That is despite a fearsome attacking trio that included Sibusiso Zuma‚ Siyabonga Nomvete and Phumlani Mkhize‚ who would all go on to have stellar careers.

The club have faded into obscurity.

Giyani-based Dynamos finished seventh in the Absa Premiership in 2002-03 and spent five seasons in the top-flight in all before the club’s franchise was sold to AmaZulu in 2006.

AmaZulu finished in the relegation playoffs at the end of the next season but survived. This was the first instance of Usuthu buying their way back into the top-flight.

Dynamos were owned by the flamboyant Pat Malabela‚ who sold after running into financial difficulties. It was reported at the time that he received R41-million for the club.

Tembisa Classic were another team that would go this route as they sold their status to Farook Kadodia the year before and became Maritzburg United.

The Greek Gods are a famous old name in South African football‚ though their glory days were in the old whites only league.

They still had a big presence in the early days of the PSL and developed a number of top players for the local league‚ including current Bidvest Wits coach Gavin Hunt among many others.

The club’s franchise was sold following the death of owner George Hadjidakis and they would later become Premier United‚ then Benoni Premier United and finally Thanda Royal Zulu.

The team still exists as a successful youth academy in Cape Town under Mark Byrne‚ which recently developed Crystal Palace youngster Nikola Tavares‚ but they do not have a senior team within Safa structures.

Rangers were the inaugural PSL champions in the 1996-97 season under coach Gordon Igesund and continued to have decent success in the following years‚ not finishing lower than fifth in the next three campaigns.

They were relegated in the 2004-05 season via the playoffs after a series of near misses.

Formed in 1928‚ the club filed for bankruptcy in 2006 and their status was purchased by the Fidentia group.

They were relocated to Cape Town and the team eventually renamed Ikapa Sporting FC‚ whose fortunes have also since slipped.

An amateur side has resurfaced in Durban called Rangers FC‚ but it is not the same club.

The Morfou family‚ owners of Black Aces‚ sold their status to John Comitis in June 2016 to bring about the birth of Cape Town City.

Black Aces were originally formed in 1937 by dairy workers as Ukhumba Black Aces and later Witbank Black Aces‚ but faded in the 1990s.

They were reborn when the Morfou brothers bought the second-tier status of City Pillars and the club renamed ahead of the 2007-08 season.

Since selling up‚ the Morfou brothers have tried to keep the Black Aces name going in Soweto with Alexandra Black Aces‚ who play in the Gauteng ABC Motsepe League.

As mentioned earlier‚ the status of Benoni Premier United (formerly Hellenic) was purchased in 2007 and relocated to KwaZulu-Natal as Thanda Royal Zulu.

The team featured in the PSL from 2007 to 2009‚ after which they were relegated‚ but they had a number of top players developed through the team‚ including forward Bernard Parker.

The team campaigned in the second-tier and came close to bankruptcy a few times‚ before a storming 2016-17 campaign in the NFD under coach Roger Sikhakhane saw them promoted back to the top-flight.

The owners of the club decided to cash in though and sold their status to AmaZulu‚ with Thanda ceasing to exist. The NFD status of the club was sold to form Richards Bay.

Bush Bucks were stalwarts of the early years of the PSL and before the start of that competition had won the country’s League Cup on two occasions.

Mark Anderson‚ John Maduka‚ Ricardo Mannetti‚ Patrick Mayo‚ Thabo Mngomeni‚ Thabo September‚ and the Mugeyi brothers Wilfred and William‚ are just some of the top players that turned out for the club.

Formed in 1957‚ they hit hard times at the turn of the century and having been relegated once‚ they bounced back only to go down again at the end of the 2005-06 season.

They were dissolved after that‚ with the status sold and a new team named Western Province United formed in Cape Town.

That club bombed and suffered relegations to eventually find themselves in the SAB Regional League in 2011.

They are now known as the Western Cape Sport School.

Vaal Professionals were a top team in the old National Soccer League and even won the BobSave Superbowl (now the Nedbank Cup) in 1994 before their relegation from the top-flight in the 1998-99 season.

They even appeared in African club competition under the South African flag‚ but since their relegation the club has disappeared into obscurity‚ though there have been efforts over the years to resurrect it.

Professionals remain a community-based side in Sedibeng but is unlikely to be seen in the top-flight again.