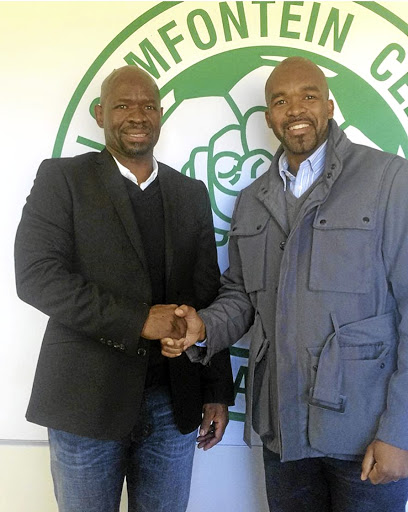 Bloemfontein Celtic captain Patrick Tignyemb has applauded the appointment of Steve Komphela as their new coach.

The club was without a coach after Serbian professor Veselin Jelusic resigned last week. Komphela met with the team for the first time after their first training session yesterday afternoon.

"I am so happy about Steve being our new coach," Tignyemb told Sowetan yesterday.

"I have known him for many years and we have become friends even though we never worked together.

"He wanted me to teach him some French and that's how the friendship began. He is really a good coach and a gentleman too, I think he has all the right ammunition to do well with us and take the team forward."

Having coached rivals Free State Stars in the past, the 50-year-old has now taken charge of Celtic just two months after his resignation at Kaizer Chiefs.

Komphela had a tumultuous three-year spell at Chiefs with no trophies.

The Kroonstad-born, Free State, tactician is still looking for his maiden piece of silverware in his career as coach in the PSL.

"It does not take away from the fact that he is a good coach, so as players we are just looking forward to the new season," said Tignyemb.

Celtic has faced stormy waters in the last few weeks after Jelusic bailed on them and it was confirmed that the Bloemfontein-based club was up for sale.

False reports of the club being sold to an unnamed Kimberley businessman threw a spanner in the works when fans reacted with protests in the streets of Bloemfontein.

But the management insisted at the time that there was no sale despite them looking for a buyer.

Cameroonian stopper Tignyemb insisted that Bloemfontein Celtic players have not been affected by the news of the sale.

"No, it has not affected us as a team because we are professionals and we still have a job to do.

"The issue of the sale is not our department, so we cannot get involved."