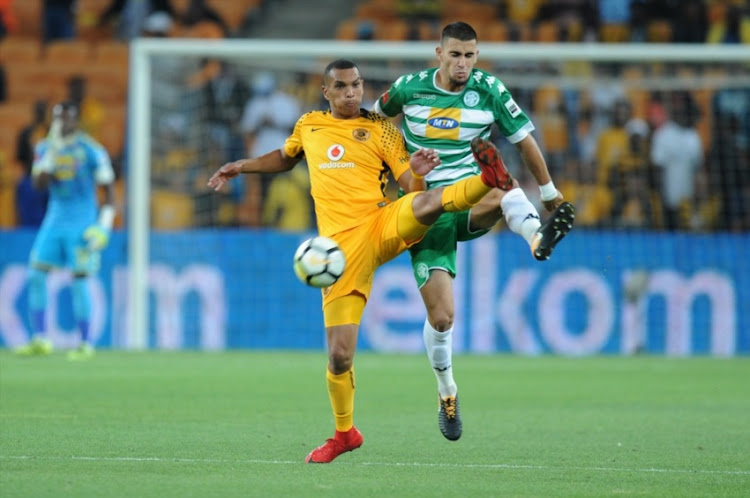 Ryan Moon of Chiefs in action with Lorenzo Gordinho of Celtics during the Absa Premiership match between Kaizer Chiefs and Bloemfontein Celtic at FNB Stadium on February 24, 2018 in Johannesburg, South Africa.
Image: Gallo Images

Lorenzo Gordinho wants to return from his loan spell at Bloemfontein Celtic to Kaizer Chiefs and Amakhosi also want the central defender back.

But according his agent Mike Makaab‚ the Free State club are trying to enforce that the player stays with them.

Gordinho‚ sent to Celtic in an unpopular move among Chiefs’ fans by the club’s then-coach Steve Komphela in January‚ has six months of the year-long loan left.

Ironically‚ if Celtic have their way and keep Gordinho until halfway through the 2018-19 season‚ he will hook up there again with Komphela‚ appointed coach of Phunya Sele Sele on Wednesday.

“We’re busy talking to Celtic at the moment‚” Makaab said.

“Chiefs want him back. But his loan is until the end of the year.

"It’s Celtic’s decision if they want to keep him.

“But we had a gentleman’s agreement [with Celtic] that if Lorenzo wanted to come back to Chiefs‚ and Chiefs wanted him‚ that they would release him.

“So I’m just hoping that sanity will prevail.

“Look‚ quite rightly Celtic have a written loan agreement. And at this point in time they are going with it. And one has to respect contracts.

“At the same time‚ if the player’s heart is at another club I don’t think as a loan player one should force him to stay.

“So we’ll have to wait and see. Lorenzo’s heart is to go back to Chiefs.”

Celtic could not be reached for comment on Thursday morning.

Gordinho played in 14 out of Celtic’s 16 games in 2018 last season‚ helping the financially-troubled club steer clear of a relegation battle and finish in 11th place.